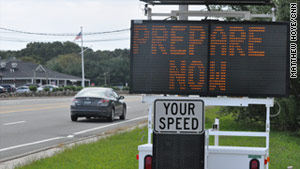 Editor's note: Check out "Open Story: Hurricane Irene," a collaborative effort of CNN and iReport contributors who are documenting the storm as it moves across the Atlantic Ocean. Get the latest updates on @CNNTravel

(CNN) -- Perhaps Virginia Gov. Bob McDonnell put it best: Saturday is going to be a "horrendous day for travel" as Hurricane Irene sets its sights on the U.S. East Coast.

Sunday probably won't be any better.

The core of the powerful storm is approaching the North Carolina coast and is expected to bring hurricane-force winds over a large swath from Virginia all the way up into Maine this weekend, CNN senior meteorologist Dave Hennen said.

Airlines have canceled hundreds of flights, cruise lines are scrambling to change itineraries, and many trains won't be running at all in the next few days.

Public transportation is taking a hit: Transit systems in New York City, Philadelphia and New Jersey will shut down on Saturday.

Greyhound has canceled or delayed a number of routes because of the storm.

Roads are expected to be clogged with people heading away from Irene's path and many tourists enjoying the still-beautiful weather on some Northeast beaches have had to cut their trips short.

U.S. military squares off with Irene

"It's kind of lousy," said Eric Orifice, 40, who lives in Boston and came to Seaside Heights, New Jersey, with his wife and two kids for a week-long vacation.

"We've got to go home early and we're just worried about hitting a lot of traffic."

Airports in the region are also bracing for the storm.

Baltimore/Washington International is "monitoring terminal and airfield drainage, checking generators and securing any equipment that may become airborne as a result of high winds," said Paul J. Wiedefeld, the airport's executive director.

Albany International Airport in New York is safeguarding the terminal, airfield and aircraft.

"Our goal is to ensure the safety of travelers, staff and equipment and be prepared to resume full operations by Monday morning," said John A. O'Donnell, CEO of the Albany County Airport Authority.

Carriers are monitoring the weather conditions carefully and taking action.

The airline has also canceled all flights at Raleigh-Durham International Airport scheduled for Saturday.

Air Tran has canceled more than two dozen Saturday and Sunday flights, according to an airline spokeswoman.

JetBlue has canceled almost 900 flights in the Northeast ahead of the storm. Most of those are Sunday and Monday flights out of the New York metro area and Boston, said spokesman Mateo Lleras.

Delta Air Lines will cancel 1,300 flights from Saturday to Monday, said spokesman Anthony Black. The carrier will not operate at any New York-area airports on Sunday, when the worst weather is expected to hit the region, he said.

Major airlines -- including US Airways, American, United Airlines, Continental Airlines, Delta, JetBlue, Southwest Airlines and AirTran -- have dropped ticket change fees for passengers scheduled to fly to or from many cities along the East Coast this weekend.

Some airlines have extended change-fee waivers into early next week.

You'll likely need lots of patience if you are calling to change your plans: carriers including American, US Airways and JetBlue are reporting long hold times because so many people are scrambling to adjust their itineraries.

How might all the cancellations impact air travel in the rest of the country? It depends on how fast the affected airports come back on line Monday, said Michael S. Nolan, an associate professor in charge of the air traffic control program at Purdue University.

"The good news is Sunday is a low air travel day," Nolan said.

Tech to keep you safe from hurricanes

Amtrak has canceled most train service operating south of Washington on Friday, Saturday and Sunday in anticipation of Hurricane Irene. Service in the Northeast corridor is not affected at this point, but more cancellations may be necessary in the coming days, Amtrak warned.

If you are planning to travel along the East Coast in the next few days, call your hotel and find out what its policies are in case you need to cancel, advised Anne Banas, executive editor at SmarterTravel.

Also keep on top of what your airline is doing, she said, especially because this kind of weather event is not within carriers' control.

"You don't want to be stranded at the airport," Banas said.

"The only thing you're entitled to in that situation is a refund. So if you're stranded at the airport, you're not necessarily going to get food vouchers or hotel vouchers."

To avoid getting stranded, check with your airline and consider rerouting or rescheduling your trip.

The approaching hurricane means some weekend cruise departures from Northeast ports such as New York may be delayed, CruiseCritic.com reported. The storm already has forced more than 20 cruise ships to change their itineraries.

"We monitor the storms closely and make strategic changes to the itineraries to keep them away from the storm," said Jennifer de la Cruz, a Carnival spokeswoman.

Meanwhile, the Bahamas is assessing the impact from the storm.

There's limited damage in major tourism areas in Nassau and Grand Bahama Island, and the region is returning to normal operations, the Bahamas Ministry of Tourism & Aviation said.

Hotels, resorts and attractions throughout the Bahamas are open and accepting arrivals, including Atlantis, which accommodated about 6,000 guests during the storm.