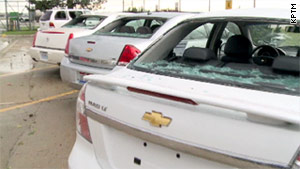 Read more about this story from CNN affiliate KPTM.

(CNN) -- Two violent storms forced the temporary closure of Eppley Airfield in Omaha, Nebraska, after high winds and baseball-sized hail damaged planes and a portion of a concourse, the airport director said.

Omaha Airport Authority Executive Director Steve Coufal said that the airfield was closed for several hours Thursday, with at least one reported injury: a pilot who was taken to a local hospital after being struck by hail.

Strong winds blew a jetway into one of the aircraft, Coufal said.

Eppley Airfield's south concourse sustained water damage at two gates, which have been closed, he said.

Southwest Airlines spokesperson Ashley Dillon said two of the airline's planes were on the ground -- one of them Flight 751 to Chicago, which was being boarded -- when the first storm hit.

The decision was made to deplane the 137 passengers from the Boeing 737, and a male pilot was struck by hail while standing in the jetway. Dillon said he was conscious when he was transported to the hospital.

Southwest cancelled the flight. Dillon said 13 flights were affected: eight arrivals and five departures. It was not immediately clear whether the flights had been cancelled or delayed.

The first storms pushed through Omaha at about 5:30 p.m. The airport was subsequently shut down so that airport officials could evaluate damage. After about an hour-and-a-half, the airport was reopened, but was closed again minutes later when a second storm came through, packing very strong winds and heavy rains, Coufal said.

CNN meteorologist Chad Myers said hailstones were up to 2.75 inches in diameter, about the size of a baseball. Video footage from local CNN affiliate KPTM appeared to confirm that estimate, as the windshields of several cars in the airport parking lot were either shattered or bore large holes and craters.

The airport director said winds of about 100 mph were reported, and visibility was between 5 and 10 feet.

About 2,700 passengers were affected by the storms. It was not clear how many passengers had their flights altogether cancelled.