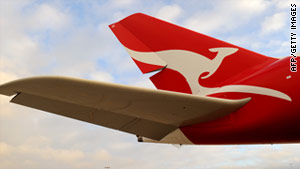 Qantas is offering a documentary on female pleasure as part of its video-on-demand offerings.
STORY HIGHLIGHTS

(CNNGo) -- Such is the evolution of in-flight entertainment that travelers can now fulfill their own needs on flights. One-flick-suits-all journeys are relics of the past.

But what exactly is that person watching next to you? And why are they getting so excited? And now why are they crying?

Orgasms and tears are on the menu for some airplane movie watchers, it seems -- but they arrive with warnings.

Qantas has taken in-flight entertainment to dizzying heights by including among its offerings a 50-minute French documentary "The Female Orgasm Explained," which comes inclusive of naked scenes and reveals the mysteries of female sexual pleasure, according to The Sydney Morning Herald.

The documentary is part of the airline's "The Edge" channel, which gives new meaning to videos on demand.

"With The Edge, we source programs that are out of the ordinary across all genres," Qantas said in a statement.

"The Female Orgasm Explained" runs until November. It does come with a warning that the film is for mature audiences only.

For crying out loud

While Qantas is warning about sexually explicit material, Virgin Atlantic is giving warnings on a different topic: tears.

The Australian reports that Richard Branson's airline surveyed travelers and found that 55 percent had heightened emotions during flight --- funny, that.

What's more, 40 percent of men hid under their blankets to hide their tears. (What are Qantas travelers doing under that blanket?)

The stories most likely to jerk the tears of those surveyed by Virgin were "Toy Story 3," "Blind Side" and "Eat Pray Love." Oh, cherub, would you like a handkerchief?

CNNGo: The world's most expensive city is ...

The first two films to carry the new Virgin Atlantic tear warnings will be "Water for Elephants" and "Just Go With It." The warnings will flash on passengers' screens.

So it seems crying and female orgasms require warnings. Laughter remains without warnings --- maybe because passengers can do it above their blankets?