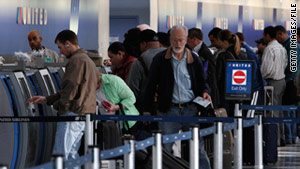 Travelers who purchased airline tickets before July 23 for travel during the FAA shutdown should get tax refunds.
STORY HIGHLIGHTS
RELATED TOPICS

(CNN) -- If you're traveling by air this month, there's a good chance the government owes you money.

Don't believe me? You can thank Congress and its inability to reauthorize the Federal Aviation Administration.

Here's how you can get your money back, though be prepared to wait a little while for things to settle.

Congress periodically has to renew the authorization of the FAA to do a variety of things, and one of those things is collecting taxes on air travel. As with everything in Washington, the left and the right all try to sneak in politically charged riders that prevent the FAA reauthorization from moving forward to fund important projects such as the NextGen air traffic control overhaul.

Until last month, Congress had been simply extending the current authorization for months at a time until something could be worked out. That changed on July 23.

When July 22 ended, so did the current authorization for the FAA and that meant it could no longer collect taxes. There was hope that once the debt-ceiling bill was passed, attention would shift to getting the FAA back up and running, but both chambers decided to take the month off.

Then Thursday, congressional leaders reached a deal to resume funding temporarily for the FAA, and the Senate passed the legislation on Friday.

When FAA authorization ended, four taxes on air travel had to be dropped:

• The 7.5% tax on the base airline ticket price
• The domestic segment tax of $3.70 per person per segment (a single takeoff and single landing)
• The international travel facilities tax of $16.30 per person for flights that begin or end in the United States, or $8.20 per person for a flight that begins or ends in Alaska or Hawaii
• The 6.25% tax on the amount paid for transporting property by air

As you can see, this applies to both domestic and international flights on any airline, regardless of where it's based.

So if you bought a round-trip ticket going from Jacksonville, Florida, to Los Angeles via Atlanta for $500, here's how the taxes and fees break down:

The passenger would be owed $46.70 for the excise and segment taxes if this ticket was purchased before July 23 for travel since the FAA shutdown.

Summer travel: Watch out for amateurs

So if you bought your ticket before July 23 for travel between July 23 and, well, whenever the FAA comes back to life, then you can get a refund for the taxes that you paid at the time of purchase.

If you bought a ticket beginning on July 23, then you weren't charged those taxes. If the FAA is reauthorized before you take that trip, then you probably won't have to pay back taxes. While Congress could try to collect, it would be virtually impossible to make it happen and ill-advised to even try.

The Internal Revenue Service has issued guidelines on how exactly to go about getting your refund. First stop? The place where you bought your ticket.

If you booked through a travel agent, go back to that agent and ask for help getting the refund. Your agent will be able to keep on top of the news to see how and when to make this happen. I wouldn't, however, bother doing it until your trip is completed so that you know exactly how much is owed to you. (If you file for a refund after your first flight, then you have no way of knowing if the FAA will again be collecting taxes by the time you return.)

If you booked directly, talk to your airline. So far, few airlines have issued much guidance. We do know that both Delta Air Lines and US Airways have committed to refund the taxes directly to the travelers. Delta says it will issue a refund "once an agreement is reached with the IRS on the procedure for doing so." US Airways said effectively the same thing.

Other airlines, however, have either given no clarification or have sent people back to the IRS. JetBlue, for example, is telling customers to go directly to the IRS to get money back. To do that, however, is also an undefined process. According to the IRS, travelers must "submit proof of taxes paid and travel dates to the IRS under procedures that are under development. The IRS will provide additional guidance at a later date."

In other words, if you bought your ticket before July 23 and are traveling after, you are owed money. We just don't know how you'll get that money back yet. I imagine the IRS is hoping people don't make their claims and the agency can pocket the extra cash, but the money is rightfully yours. Keep all your documents for completed travel and stayed tuned for updates on the IRS procedures.