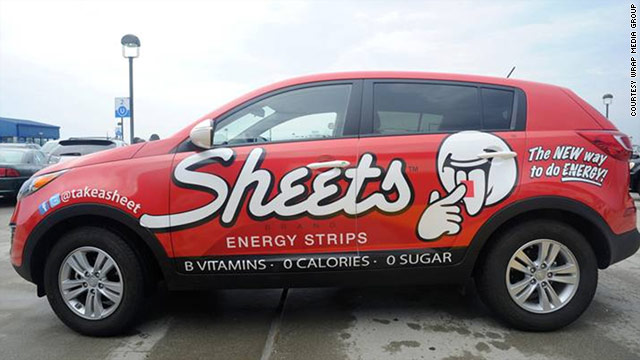 Starting August 10, you can rent an ad-wrapped car in Atlanta, Georgia, for a cheaper price.
STORY HIGHLIGHTS
RELATED TOPICS

(CNN) -- In the next few months, visitors to Atlanta may spot red cars plastered in black and white ads parked at tourist hot spots.

But these sedans and SUVs won't be driven by product employees or marketers. Families and travelers on vacation will be behind the wheel.

Budget Rent a Car of Atlanta will offer 25 vehicles wrapped in advertising to consumers at a discounted cost until November. Prices will fluctuate based on the daily rental rate, but consumers can save hundreds of dollars. One of the first customers signed up for the deal secured an SUV for four days at $88, saving about $200.

The rental car company began accepting reservations last month, but the wrapped vehicles will not be available at the 13 Atlanta Budget branches and Hartsfield-Jackson Atlanta International Airport until August 10. Interest has been "overwhelming" so far, said Heather Etzler, vice president and general manager for Budget Rent a Car of Atlanta.

Several hundred people have already tried to book a vehicle, according to Matt Custage, vice president of Wrap Media Group -- the company based in Boca Raton, Florida, that came up with the idea to advertise on rental cars.

Wrap Media decided to launch the campaign in Atlanta because the city has a large rental car market and hosts one of the busiest airports in the country. Atlanta tourist destinations such as the Georgia Aquarium, Turner Field and Stone Mountain Park are "high exposure areas" where rental cars typically travel, and advertisers believe the sites are prime locations to market their products, Custage said.

Travelers interested in renting a wrapped vehicle must first qualify by filling out an online survey that determines if they will be traveling to a populated area.

But if driving an advertisement isn't worth the cost savings, consumers are not "locked in" to the deal and can pull out at any point, Etzler said.

"If they see it in person and don't feel comfortable driving it, or feel they'd get questioned by the general public, they can opt out of it," she said, adding that Budget will provide an unmarked car for the normal retail rate.

All parties involved have high hopes for the venture, which hasn't been tried before. Based on the immediate positive response, Custage said plans are under way to work with national advertisers and rental car companies in other cities. He also mentioned the possibility of expanding the idea to rental RVs.

"I think it's only going to get bigger from here," he said.