Congress to airlines: Pass along savings to passengers or trust fund 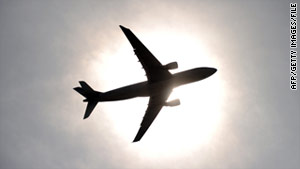 The tax holiday could save passengers $25 to $50 on a typical flight.
STORY HIGHLIGHTS
RELATED TOPICS

Washington (CNN) -- Airlines benefiting from a unplanned federal tax holiday should save the money for the government or pass it along to the passengers, but should not pocket the money themselves, key congressional leaders said Tuesday.

At issue is millions of dollars in passenger taxes -- taxes ordinarily collected by the airlines. But since Saturday, the airlines have not collected the taxes because of Congress's inability to pass a bill to fund the Federal Aviation Administration.

The airlines could have passed along the savings to air travelers. But instead, most airlines raised their base ticket prices at amounts equal to, or similar to, the expired tax.

That has prompted outrage from both Republican and Democratic lawmakers, who see eye-to-eye about little else.

"As we have heard from airlines for many years, these fees, all of which are passed on to the consumer, depress the demand for air travel, hurting the industry's bottom line. We are left to conclude that your previous assertions were incorrect about the impact of taxes and fees on the industry," Sens. John D. Rockefeller IV, D-West Virginia; and Maria Cantwell, D-Washington, wrote in a letter to Delta Air Lines CEO Richard Anderson, chairman of the board of the Air Transport Association, an industry group.

Rockefeller and Cantwell urged the airlines to "put all of the profits that they are making" from the tax lapse into an escrow account so they can transfer it to the Airport and Airway Trust Fund (AATF) when Congress reinstates the taxes.

"If the industry is unwilling to protect the integrity of the AATF, at a minimum, it should pass the savings onto the consumers," the senators said.

In an interview with CNN on Monday, Rep. John Mica, R-Florida, made a similar suggestion, saying the airlines should act responsibly, "either holding the money for the trust fund or not ripping off the consumer."

"I expect airlines across the country to be good stewards of taxpayer dollars. Either voluntarily or through statute or through our next (FAA budget) extension, we'll make certain that the money does go into the trust fund and it isn't pocketed by the big airlines," Mica said.

The tax holiday could save passengers $25 to $50 on a typical flight. Collectively, the taxes amount to about $200 million a week, the government says.

"I think that's unfair to the flying public," LaHood said Monday. "What I've said to the airline association is you need to start thinking about the customer. And the fact that you're not collecting the tax should not be a burden on the customer, on the flying customer."

The Air Transport Association said it is preparing a response to Sens. Rockefeller and Cantwell.

"Customers are not impacted and are paying the same ticket prices they were last week," ATA spokesman Steve Lott said. "As we have done for months, we strongly urge members from both chambers of Congress to meet together and resolve their differences in order to enact a long-term FAA reauthorization bill."