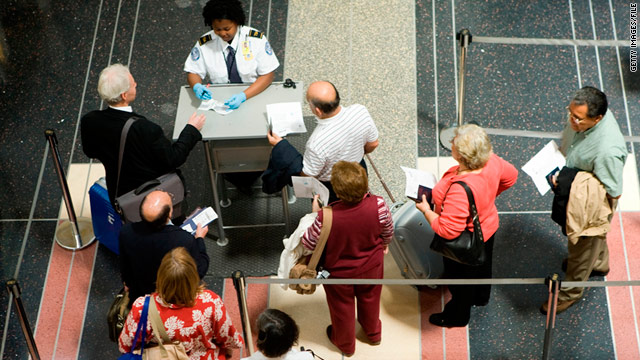 Save yourself some time by wearing slip-on shoes to the airport, one frequent traveler advises.
STORY HIGHLIGHTS
RELATED TOPICS

(CNN) -- Each week, I offer my thoughts on air travel, but I thought we'd do it differently this time. Let's flip things around and see what road warriors have to say.

I asked frequent travelers to give me their single best tip for less savvy travelers. I wasn't looking for the usual "buy tickets on a Tuesday" stuff (that I don't really believe anyway). I'm talking about the little things that can make life just that much better while traveling.

And many of the responses I received did, in fact, involve the little things. Paul Blevins, a United frequent flier out of Tampa, Florida, said, "Don't wear laced shoes."

If you've done the security dance at an airport, you know why this is. We all have to take our shoes off at the checkpoint, so if you have no laces, it will make it easier. Otherwise, you'll be stumbling out of the checkpoint to find a bench to recompose yourself.

Other travelers focused on what you bring in your bags and even what kind of bags you bring. One frequent flier suggested traveling "with 1 bag. Not 1+purse+laptop bag. 1 bag. Doesn't matter much for airports, but is huge for taxi or train."

This isn't the airline I signed up for

Jack Walsh, a pilot for a major U.S. airline, said "pack lighter; no you really don't need it." Packing too much is a common mistake. And in general, pilots and flight attendants are the most frequent fliers, so their advice is golden.

Frequent traveler Laura Green of Chicago suggested something that only mothers might consider: "Baby wipes, you never know when those will come in handy!" But this shouldn't be limited to mothers. Just touched something disgusting in the seatback pocket? Break out the baby wipes. Some unidentifiable substance on the desk in your hotel? Spill something on your shirt? Don't want to touch that subway handrail? Baby wipes are universally useful.

Other points of advice seem to go against conventional wisdom. Ken McGuffin, a frequent flier from Toronto, said, "Don't show up to the airport too early. You're just getting in everyone else's way."

As airlines tell travelers to arrive increasingly early for flights as security checks get longer and more involved, people start to get to the airport earlier and earlier. I'm just waiting for tent cities to pop up at the ticket counter for those who arrive a day or two in advance.

Mornings at the security checkpoint can be incredibly crowded because people with flights from 7 to 10 a.m. all start showing up around 5:30 a.m. That just creates a more crowded environment and slows everyone down. So follow the airline check-in times, but don't get overzealous. (Leave the tent at home.)

Summer travel: Watch out for amateurs

Ultimately, some of the best advice comes from those who have seen it all. "Go with the flow. Some of my best travel experiences have been due to delays, canceled flights and language barriers!" That's great advice, though it won't be easy if you're on a deadline. Things do go wrong, but if you stress out with each problem, you'll drive yourself crazy.

But no matter what, you should remember one thing passed on by a sage road warrior.

"NEVER enter an aircraft lavatory in your socks."

Yes, it is the little things that matter.