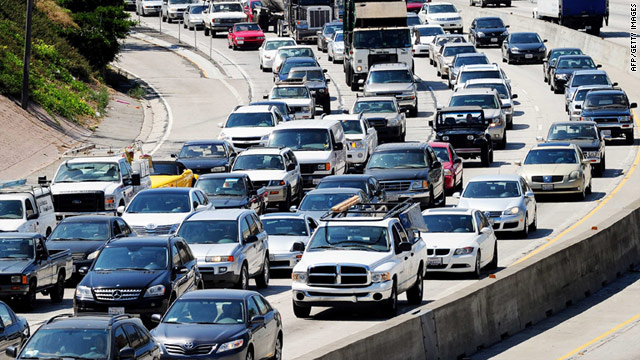 "Drivers will be hungry after sitting in traffic all day," said one L.A. restaurateur.
STORY HIGHLIGHTS

Los Angeles (CNN) -- Will the closure of the Interstate 405 in Los Angeles hurt small businesses?

The forecasts of gridlock have been alarming, but as a 10-mile stretch of the 405 closes for 53 hours this weekend, businesses say there is a lot more than a traffic jam at stake.

"They are making it out to be a nuclear event," hairdresser Jon Condon said.

He said city officials have frightened drivers with dire predictions of 50-mile traffic jams. He is closing his Brentwood Village shop this weekend and believes Los Angeles residents will be hunkered down in their homes.

"It's just too much," he said, "too much of a hassle getting here."

Brentwood Village is a quaint upscale shopping area just off the portion of the 405 that is to be closed. Down the street, Janet Danova says no one knows what to expect.

Across town, Adrineh Khechadorian is already lamenting lost business. She operates a party rental service with lots of customers in the west side of Los Angeles, the area most affected by the planned 405 closure.

"We've had two major parties canceled this week," Khechadorian told CNN. The hosts, she said, believed their guests would not be willing to brave the traffic.

But, according to the Los Angeles Chamber of Commerce, some business people are hoping to turn the predicted gridlock into gold.

Restaurateur Frank Pezeshki has purchased extra food for his burger joint, located in the shadow of the 405, less than a mile from where the freeway will be closed.

"Drivers will be hungry after sitting in traffic all day," Pezeshki said.

O'Neil Sportswear in Santa Monica is one of dozens of businesses running special "405" sales.

"We are hoping to attract local customers," Manager Wendy Harrell said. She has few illusions that customers will be lured from across town this weekend.

Even artists are hoping that Carmageddon will lead to more exposure for their work.

Composer Ken Elkinson is offering free downloads of his "Music for Commuting." It was recorded, he says, to ease the tensions of being stuck in southern California's insufferable traffic. And he anticipates that this will be a high-demand weekend for his work.

But motorist Rita Longcore offers her own prescription for beating the Carmageddon blues. "I'm not getting in my car," she says.