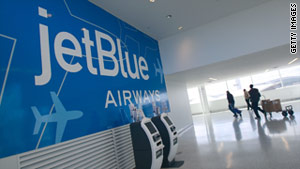 A stun gun was found on a JetBlue flight Friday after it arrived in Newark, New Jersey.
STORY HIGHLIGHTS

New York (CNN) -- Authorities are investigating how a stun gun ended up on a JetBlue aircraft in New Jersey on Friday night.

An airline crew found the stun gun in a seatback pocket while cleaning the plane after it landed at Newark Liberty International Airport around 10 p.m., JetBlue spokesman Sebastian White said in a statement.

The flight, carrying 96 people, originated at Logan International Airport in Boston, but the plane had made several other stops throughout the day, White said.

The incident is under investigation by the FBI in coordination with the Transportation Security Administration, according to TSA spokeswoman Lisa Farbstein.

"All current information indicates this is not part of an attack," said Special Agent Bryan Travers of the Newark Division of the FBI.

Officials at Massachusetts Port Authority, which owns and operates Logan International, had no comment on the incident.

The Massachusetts Port Authority is currently being sued, along with United Airlines and a private security company, by the family of Mark Bavis, who died aboard United Flight 175 from Logan Airport in the Sept. 11, 2001, terrorist attacks.

Papers filed in Manhattan Federal Court allege that security screeners at the airport were operating under a general manager who was unaware of the al Qaeda terrorist threat and were unable to detect weapons such as the chemical spray Mace.