This isn't the airline I signed up for 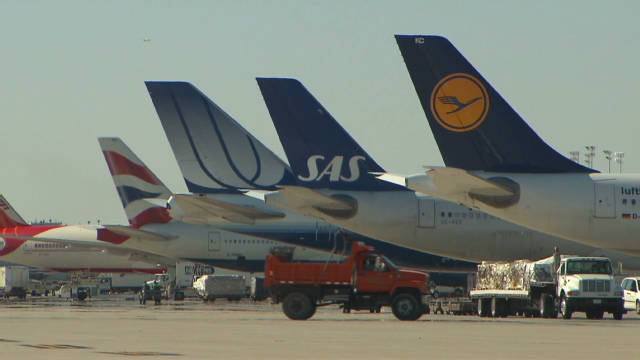 'Codesharing': What to know when you fly
STORY HIGHLIGHTS

(CNN) -- When I worked at America West, we had a codesharing partnership with Continental. Friends would call me, confused.

"I bought a ticket on America West, but there's a Continental airplane here. What's going on?" This was common back then, but it has become a bigger issue with the growth of codesharing -- airlines selling flights operated by partners as their own.

While disclosure of the airline operating the flight is required by the government, it's still easy to miss if you aren't paying close attention.

In fact, if you book a ticket on one airline, say United, it's possible you'll never set foot on a United plane. Let's say you want to fly from Philadelphia to Krakow, Poland. You can book United flight 2216 connecting to United 9254 in Newark before finally getting on United 8756 in Munich. But you're never stepping foot on United.

What do airline alliances mean for you?

For those who don't care who they fly as long as they get there, this isn't much of an issue. But for others, it's a real problem. People have expectations of what they'll get when they fly a certain airline and all these airlines offer different experiences. So what can you do? Here are some tips:

• Before you book, make sure you see which airlines are operating the flights. At a glance, if it's a high flight number (like United 9254), it's probably operated by another airline. Airlines usually operate the lower flight numbers themselves. But as mentioned, it is required by law that the operating airline is disclosed, so you will see it somewhere before you book.

• Once you find which airline is operating the flight, go to that airline's website directly to learn more about what it offers onboard. Most airlines will provide information on in-flight entertainment, seating and meals on their own sites. But in this case, what you find on United.com won't apply to these other airlines.

• If you're concerned about legroom, go to seatguru.com and look up the airplanes for the airline operating the flight. Both Delta and Air France operate the Boeing 777, for example, but on some planes, Air France squeezes in an extra seat in each row. If you can't figure out which plane it is, try seatexpert.com, where you can enter your flight number to find out.

• If safety records are your concern, I like aviation-safety.net. In general, U.S. airlines don't partner with airlines that have poor safety records (at least, not currently). But if it's an airline you don't know and you want to know more, this website will give you accidents and incidents for all airlines with reasons behind each one (if known).

• Once you've booked, get all the information about the operating airline's flights. For example, United 2216 is actually US Airways 4552 and United 9254 is Lufthansa 413. This will make it easier to find in the airport.

Who cares about expiring miles? It's upgrades that matter

• Also, try to get the record locator (usually a six-character confirmation number) from each operating airline. When you book with an airline, you'll get that airline's record locator, but different airlines use different systems. If you try to use that United number with Lufthansa, it won't work. United will actually give some of these on its website, but most airlines won't. So call the operating airline once you're ticketed, give them your flight information and name, and they can tell you what confirmation code they use to identify you. You may need that to check in online and it will be helpful if things go wrong.

Codesharing is just a part of flying these days, but it doesn't have to be painful. Just educate yourself before you go, and you'll know exactly what to expect.