How clean is your favorite beach? 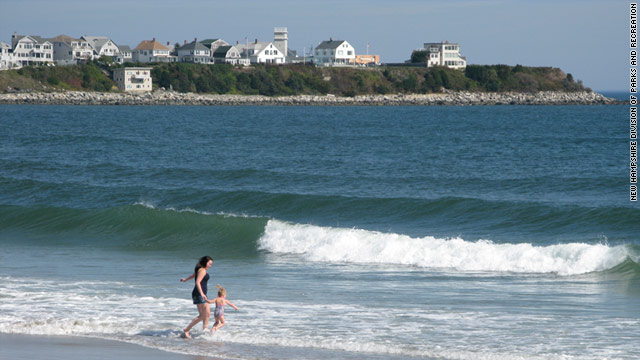 Hampton Beach State Park in New Hampshire is a "superstar" when it comes to water quality. Other beaches didn't fare so well.
STORY HIGHLIGHTS
RELATED TOPICS

(CNN) -- Most beaches look idyllic at first glance, but as you head to the shore this summer, what's really lurking in the water you're bathing in?

Sharks and jellyfish aren't the only things to worry about, it turns out.

Pollution from storm water runoff and sewage overflows continue to plague the country's beaches, according to the 21st annual beachwater quality report released Wednesday by the Natural Resources Defense Council.

"With the Fourth of July fast approaching, Americans nationwide are breaking out their swimsuits, loading up their cars and heading to the beach," said David Beckman, water program director for the nonprofit environmental group.

"It's a summer rite of passage, but unfortunately it can also make you sick."

The report, which focuses on information from the previous vacation season, found that U.S. beaches saw the second-highest number of closing and advisory days in more than 20 years last year -- up 29% from 2009.

The council attributed the rise to oil washing up in the Gulf of Mexico from the BP disaster, as well as heavy rainfall in Hawaii and contamination from unidentified sources in California.

In fact, more than a year after the BP spill, the effects linger. As of June 15, 2011, four beach segments in Louisiana that have been closed since the disaster have yet to open, and three beaches in Florida have remained under oil spill notice, the council said.

The report's main feature is a five-star rating guide to 200 of the nation's most popular beaches.

Stars were awarded if a beach rarely, if ever, violated the national water quality standard in 2010; if it kept up that record for the last three years; if it was monitored more than once a week; if any advisories were issued promptly; and if beachgoers were notified both online and via signs on the beach of any problems.

For the first time, the council awarded "superstar" status to four beaches that received five stars this year as well as the past three years, indicating a history of very good water quality.

The "superstar" beaches are:

On the other side of the spectrum, the council also named "the top 10 repeat offenders," or beaches that stand out as having persistent contamination problems. They include:

Nationally, the most common reason officials cited for closing beaches or issuing advisories last year was bacteria levels that exceeded quality standards, the council said. That indicates the presence of human or animal waste in the water.

It's a serious issue because polluted beachwater can cause stomach flu, skin rashes, pinkeye, respiratory infections, meningitis, and hepatitis, the report said.

Children are especially vulnerable, perhaps because they submerge their heads more often and are more likely to swallow water when swimming.

For more information about your favorite destination, check out the council's guide to finding a clean beach.