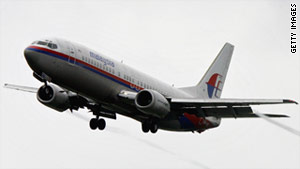 (CNNGo.com) -- Malaysia Airlines will ban babies from traveling first class on its Airbus A380 super jumbo jet, according to online reports.

The decision comes after the airline banned babies from the first class section of its fleet of Boeing 747-400 jets.

The baby ban will be extended to its Airbus A380 jets, Malaysia Airlines CEO Tengku Azmil told Australian Business Traveller on Sunday via Twitter. Requests from CNNGo to Malaysia Airlines for comment went unanswered at time of writing.

The airline ordered six A380s and the first is expected to be delivered in June 2012. "We r planning to stick to our policy for now," Azmil told Australian Business Traveller in a Twitter exchange when asked whether the first class section of its A380 planes will have bassinets. (Read the complete exchange here).

Some Twitter users questioned why the airline doesn't try other nursing techniques, such as employing sky nannies and distributing baby blankets.

Defending his policy, Azmil said that while it was "a tough call," it addresses complaints from first class passengers that they spend a lot of money on first class travel but are often unable to sleep because of wailing infants.

Instead, babies and their parents will now need to fly in the airline's business and economy classes.