Hotel housekeeping: Do you tip? 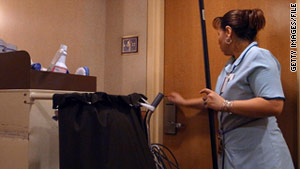 (CNN) -- Business traveler Bob Logan always tips hotel housekeepers, but he still has questions about the best way to do it.

"Let's say I'm going into a hotel for three nights, do I leave something every night, do I do it only at the end? Does the housekeeper at the end -- is it the same one that did it the other night?" wonders Logan, a New Jersey business development director who spends about 50 nights a year in hotels.

Housekeeping is a realm of hotel tipping that even frequent travelers find confusing. Tipping the bellman is obvious; he's standing right there. But many guests skip tips for the hidden housekeepers or forget gratuities in the scramble to get out of the room.

Survey data shows that about 30% of U.S. hotel guests leave tips for hotel housekeepers, according to Michael Lynn, a professor at the Cornell University School of Hotel Administration.

Since housekeeping positions fall into the out-of-sight ("back of the house") category of hotel work, the jobs aren't considered tips-based positions. Still, that doesn't mean tips aren't warranted, and in terms of tipping etiquette the rule of thumb is, "When in doubt, do," said Lizzie Post, an etiquette expert with the Emily Post Institute.

"This is a person who really does try to make your stay in your room nice every single day, and that is why we tip her," Post said.

So when and how much? Post offered these guidelines:

• Tip every day to ensure your tip gets to the person who actually cleaned your room.
• Leave a note in your room with the money indicating it is for housekeeping.
• Tip $1 or $2 per person, per night in most hotels. In higher end hotels, $3 to $5 per person per night is typical.
• In a motel, tips are generally not necessary for a one-night stay. The $1 or $2 standard is appropriate for multiday stays.

Tipping housekeepers is "a really lovely thing," said Reneta McCarthy, a Cornell lecturer who started out in the industry as a housekeeping manager with Marriott.

"But generally speaking I would say the majority of people don't do it. And when you look at it, you know, I hate to say it, but this is not considered a tips position. The housekeepers, unlike the bellmen, are not filling out tip reporting forms," she said.

The national average hourly wage for bellhops was $11.40 in May 2010, according to Bureau of Labor Statistics wage estimates. The average for housekeepers was $10.17, according to survey data. Survey forms issued by the bureau ask for information on tips, but it's unclear how reporting varies between housekeepers and bellhops.

While those who study the lodging business are on the fence about tipping rules, many who give travel advice are fully in favor of tips for housekeepers.

"You really should, especially if you're a very messy guest and if you use all the towels ... and request extra pillows and blankets," said HotelChatter.com managing editor Juliana Shallcross.

"Housekeepers have so much more work to do these days as hotels roll out superplush bedding with six pillows at least and heavier sheets and duvets and everything needs to be washed and cleaned."

The most typical tip is $2 a day, according to Bjorn Hanson, a professor at NYU's Tisch Center for Hospitality, Tourism and Sports Management.

In some hotels, envelopes marked with the housekeeper's name remind guests of the service they're receiving.

Post isn't a big fan of being told she's supposed to tip, but said sometimes it is nice to know the name of the person who is taking care of the room. And she admitted that occasionally she forgets to tip on hectic business trips.

Business traveler Logan said he feels uncertain when he waits until the end of his stay to tip his standard $2 per night, so he's a fan of the envelopes as a reminder to take care of it daily.

"I kind of like that because it just makes me think that it's a little bit fairer."

What do you think? Do you tip? How much and how often? Share your comments below.