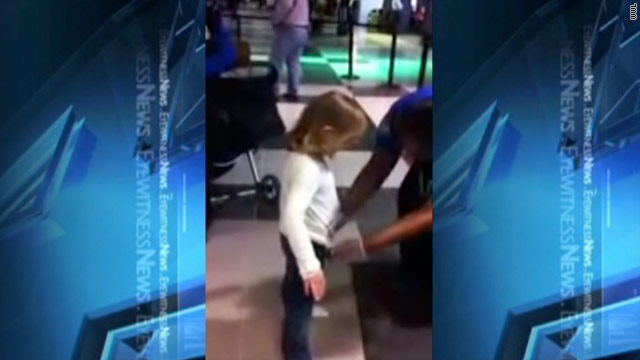 Video of the April 5 pat-down incident was posted on YouTube.
STORY HIGHLIGHTS

(CNN) -- The Transportation Security Administration is working to change its policy on how screeners can search children, aiming to decrease but not necessary eliminate pat-downs for young travelers.

The decision, announced by TSA Administrator John Pistole at a Senate Homeland Security and Government Affairs Committee meeting Wednesday, was prompted by outrage over a video-recorded pat-down of a 6-year-old airline passenger at the New Orleans airport on April 5. The video, which was posted on YouTube, shows the girl protesting teh search at first, although she complies quietly while it is under way.

Pistole explained to committee members that a female security screener performed a pat-down search on the 6-year-old girl because the child had moved while passing through an airport body imaging machine. That prevented the device from getting a clear reading that the child was not carrying any banned objects through airport security.

"We have changed the policy to say that there'll be repeated efforts made to resolve that without a pat-down," Pistole told committee members.

The new policy will apply to children 12 years old or younger. It is not currently in effect, but rather is being "operationalized" before its full roll-out in U.S. airports, TSA spokesman Greg Soule said Thursday.

Should TSA change screening for kids?

Reasons why you might get a pat-down
RELATED TOPICS

The change aims to "give security officers more options for resolving screening anomalies with young children," according to Soule. It has not been specified exactly what the new procedures entail, but it won't prohibit all pat-downs of young children.

"This decision will ultimately reduce -- though not eliminate -- pat-downs," said Soule.

The New Orleans incident renewed debate over the the TSA's security practices, especially their use on such low-risk passengers as young children. A backlash against passenger pat-downs, an alternative to full-body scans in some locations, swelled during the holiday travel season last year. Pistole maintained at the time that the agency walks a fine line between privacy concerns and public safety.

However, during the committee meeting, U.S. Sen. Rand Paul, R-Kentucky, grilled Pistole about erring too far on the side of safety.

"This isn't to say we don't believe in safety procedures," Paul said. "But I think I feel less safe when we're doing these invasive exams on a 6-year-old. It makes me think that you're clueless, that you think she's going to attack our country, and that you're not doing your research on the people who would attack our country."

Pistole suggested a pat-down of a child is not entirely unjustified.

"Unfortunately we know that terrorists around the world have used children as suicide bombers," Pistole replied.

CNN's Simon Hernandez-Arthur and Mike Ahlers contributed to this report.