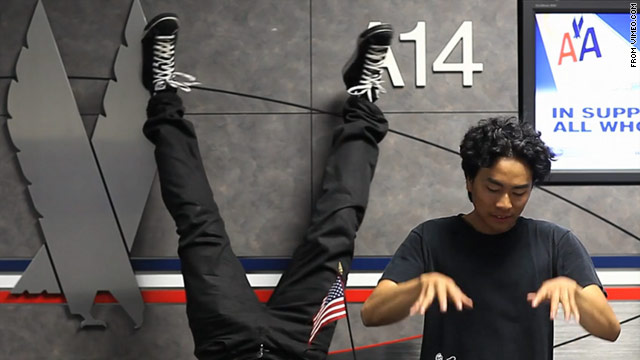 The video includes a scene in which two men have fun at an empty American Airlines gate at Dallas-Forth Worth International.
STORY HIGHLIGHTS
RELATED TOPICS

(CNN) -- A viral video showing two men horsing around in an empty airport is getting a lot of laughs and attention online but also raising questions about security at Dallas-Fort Worth International Airport.

The clip, called "STUCK," was posted this week on Vimeo.com by a user identifying himself as Joe Ayala.

"While on our way home from Formula Drift Palm Beach, Larry Chen and I found ourselves stranded over night in the Dallas airport as our flights home were canceled. The following is a brief summary of the events that took place that night," the user writes.

The video shows the men racing through airport's empty terminal corridors in airport wheelchairs while a janitor who is vacuuming gives them a puzzled look.

They also try out the public address system at American Airlines Gate A14 and pound the keyboard of one of its computers. One of the men even does a handstand in the background.

They throw soap at each other in a bathroom and spin on the moving handrails of escalators.

But in one of the video's most talked-about scenes, they enter a closed restaurant, and one of the men appears to pour himself a glassful of beer on tap, which he drinks in one gulp.

Ayala and Chen are automotive photographers who had $30,000 worth of camera equipment with them when they were stuck so they decided to make the most of it, according to Jalopnik.com, a website that covers the automotive industry and interviewed the men.

"It was definitely the most fun I've had in an airport," Chen told the site.

"I wasn't actually going out to steal beer," he said in reference to the restaurant scene. "I washed the cup and put it back in the fridge. I wanted to leave no trace. I didn't want to cause any trouble. Next time we go to that airport I'll get a beer and leave a $20 tip."

The incident took place on June 5 and involved those two men only, said David Magaña, manager of public affairs at Dallas-Fort Worth International.

Although it may appear they didn't have any security around them, they were being watched, Magaña said.

"It's important to note that security agents observed the two filmmakers at several points during the making of the video. Because the filmmakers were presenting no threat to themselves, to others or to flight safety, and were causing no damage, there was no imperative to curtail their activities," Magaña said in a statement.

"DFW Airport, together with its security partners, maintains a high level of security at all times, and at no time did the filmmakers' activities present any level of danger or threat to flight safety. And by the way, they also picked up after themselves, including the restroom."

The video did point out the need to better secure the restaurant seen in the clip, and that issue is being addressed immediately, the airport said.

The two men do not face any legal trouble, Magaña added.

Still, a member of airport's board of directors expressed unease about the prank to CNN affiliate KTVT-TV in Dallas-Fort Worth.

"It's not funny. It's not going to happen again as far as I'm concerned. It should not have happened because it gives the perception the airport is sitting out there unguarded and that's why I was concerned, and am still concerned," Betty Culbreath told the station.