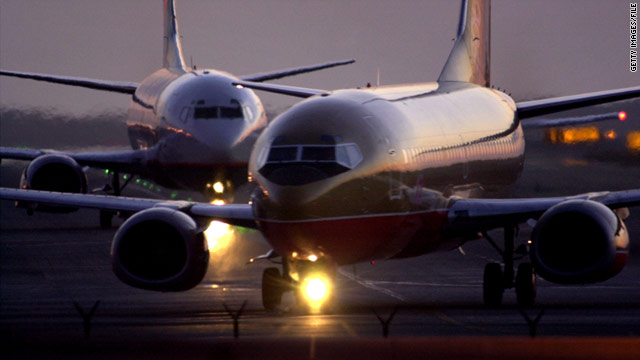 Tarmac delays have dropped dramatically, but the effect on flight operations is not insignificant, Snyder says.
STORY HIGHLIGHTS

(CNN) -- It's been more than a year since the so-called tarmac delay rule went into effect, promising hefty fines for flights that sit on the ground away from the gate for more than three hours.

The Department of Transportation is proclaiming the rule an unqualified success, as it has every month since it started. It's true that long ground delays have disappeared, but there has been collateral damage. Canceled flights have gone up significantly, despite the DOT's claims to the contrary.

There were only 20 ground delays of three hours or more between May 2010 and April 2011, compared to 693 in the prior year, according to the DOT. That's absolutely true, and there was no question that long ground delays would disappear with the threat of fines of up to $27,500 per passenger in place. What the department doesn't make clear, however, is the very significant impact on cancellations.

The DOT cherry picks the numbers that help its cause while ignoring the rest. From its press release:

As they say, you can make statistics say whatever you want, and that's exactly what the DOT has done. Using Bureau of Transportation Statistics data, I see that this is warped dramatically.

Those numbers are right, but they don't take into account the number of flights that were delayed that long in the first place. In the year ending April 2011, there were 3,386 flights with a two-plus hour ground delay, meaning 11.4% were canceled.

However, in the prior year, there were a whopping 5,328 flights in that same position. Only 6.3% of those were canceled, so flights with long ground delays were just about twice as likely to cancel this year versus last.

But, wait. Isn't it a good thing that ground delays were down so much? Sure, in theory. Nobody wants to be stuck on the ground for that long anyway. But this wasn't just a wholesale improvement in the way airlines operate precipitated by the rule. The airlines had to change the way they operated and that meant canceling more flights in advance, a number the DOT conveniently ignores in its recent press release.

If you tried to travel last winter when bad weather (the primary cause of long ground delays) rolled through the East Coast or Midwest, you know that airlines got far more aggressive at canceling flights in advance to avoid those delays, and you might have found yourself out of luck. In fact, looking at the total cancellation rate over that same period, we see a 1.9% cancellation rate for the year-ending April 2011, up from 1.59% the year before.

That might not seem like a lot, but it is. Let me put it a different way. More than 19,000 fewer flights would have been canceled in the year ending in April 2011 had we seen the exact same cancellation rate as the year before. If we assume each flight had 75 people on board, that's about 1.4 million passengers who wouldn't have had their flights canceled.

Some supporters of the rule maintain that this is still a good thing. Some would rather endure a flight cancellation than be stuck in a long ground delay. But not everyone feels that way, and that's the problem. When bad weather rolls in, airlines implement waivers that allow travelers to postpone plans without a fee. That gives travelers options. The DOT's blanket ground delay rule takes away those options by increasing advance cancellations.

There are people who need to travel and are willing to endure a long delay if the only other option is a cancellation. Some people are traveling to weddings, others to see a sick relative. There are a million reasons people travel, and when cancellations go up, those who really want to go lose that option. That's especially true in an era when airlines fill such a high percentage of seats that there's little slack to absorb passengers from a canceled flight.

How to deal with airport strandings

Of course, it's not fair to just peg any change in cancellations solely on this rule. The weather is never the same each year, and there can be airline operational differences, so circumstances can drive changes. But airlines have been outspoken saying that there has been a real impact. US Airways, for example, said that during the first nine months of the rule, nearly 30,000 people saw their flights canceled just because of this rule.

That doesn't even count the additional flights canceled in advance.

But the DOT doesn't like to look at the details. It likes to paint broad brushstrokes and claim victory. Unfortunately, that comes at the expense of thousands and thousands of travelers and their travel plans.

The opinions expressed in this commentary are solely those of Brett Snyder.