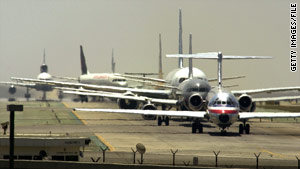 (CNN) -- Only 20 tarmac delays of more than three hours were reported in the year after the Department of Transportation's tarmac delay rule was implemented, according to DOT figures released Tuesday.

"It's clear that we've accomplished our goal of virtually eliminating the number of aircraft leaving travelers stranded without access to food, water or working lavatories for hours on end," said U.S. Transportation Secretary Ray LaHood in a statement.

The tarmac delay rule carries the possibility of stiff fines for airlines if passengers are stuck on the tarmac for more than three hours on domestic flights. No fines have been levied since the rule was implemented, according to the DOT.

Critics of the rule said flight cancellations would spike as airlines tried to avoid penalties. DOT figures show that the number of flights canceled after tarmac delays of more than two hours -- "those most likely to be canceled to avoid violating the rule" -- increased slightly, from 336 the year before the rule to 387 between May 2010 and April 2011.

"And the predictions of the airlines that there would be an "Armageddon" of flight cancellations did NOT materialize," Hanni said via e-mail.