Is this the checkpoint of the future? 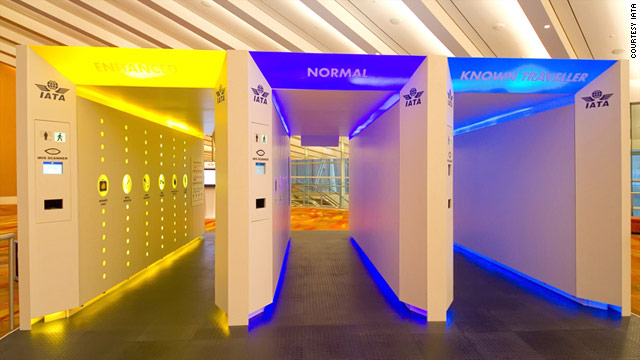 The International Air Transport Association's "Checkpoint of the Future" would direct travelers into one of three lanes.
STORY HIGHLIGHTS

(CNN) -- Billing it as a way to end the one-size-fits-all approach to airport security, the International Air Transport Association on Tuesday unveiled a mock-up of what it called the "Checkpoint of the Future."

Instead of a single screening procedure applied to all fliers, the group envisions that passengers would be divided into risk categories based on the information available about them.

They would then be directed to one of three lanes: "Known Traveler," "Normal" and "Enhanced Security."

The first -- and quickest -- lane would only be available to fliers who have registered and undergone background checks with their governments.

Normal screening in the second lane would apply to the majority of travelers. New technology would allow them to walk through without having to take off their clothes or shoes, or unpack their bags.

Passengers for whom less information is available, who are randomly selected or who are deemed to be an "elevated risk," would receive more screening in the third lane.

The system would focus resources on passengers who pose the greatest threat while reducing the hassle for the vast majority of travelers who are low risk, said the International Air Transport Association, which represents the world's major airlines.

"Today's checkpoint was designed four decades ago to stop hijackers carrying metal weapons. ... It is time to rethink everything," Giovanni Bisignani, IATA's director general and CEO, said at the World Air Transport Summit in Singapore.

"That means moving from a system that looks for bad objects to one that can find bad people," Bisignani said.

A biometric identifier in your passport would determine which lane you go through based on a risk assessment performed before you arrive at the airport.

Nineteen governments, including the United States, are working to define standards for a Checkpoint of the Future, IATA said. The group estimated it could be a reality in about five to seven years.

The U.S. Travel Association called for a similar plan earlier this year. In a report, titled "A Better Way," it suggested creating a trusted traveler program that would allow fliers who volunteer certain information about themselves to go through less rigorous security before their flight.

In March, U.S. Homeland Security Secretary Janet Napolitano said the government was working on an "airport checkpoint of tomorrow," designed to make the passenger experience quicker and less intrusive while still maintaining security.

The International Air Transport Association said it is coordinating closely with the U.S. government on the program.