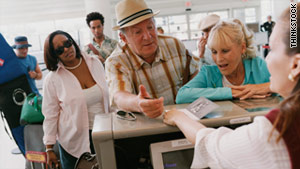 Boarding an airplane has become a race to secure bin space.
STORY HIGHLIGHTS

(CNN) -- People like to complain about all aspects of the flying experience today, but there's a particular part of it that seems to draw anger from just about everyone: boarding.

It may be surprising, but airlines put a lot of thought into this process, and American and United have both recently made changes to try and tweak their systems. The reaction to the changes? United saw so much anger that the airline has already reversed a part of its move.

Now, you would think that with so many people unhappy about the state of flying, they wouldn't want to board until the last possible minute. Of course, that's not the case. Go to any gate area and you see people hovering, waiting for their chance to race on to that airplane and ... sit there for several hours.

For those in coach, there's really only one reason to get on board quickly. To use my father's mantra, it's all about bin space. Even though many airlines have installed larger overhead bins that can accommodate a standard roller bag straight-in, it's still not enough room. The sooner you get on board, the better chance you have of finding bin space near your seat.

Checked bag fees have exacerbated the situation. Passengers have gotten more and more creative at stuffing all their worldly belongings into a carry-on bag just to avoid the cost of checking. With this trend, it's not uncommon to see bin space full before "general" boarding even begins. That means people have to check their bags at the gate, something that doesn't cost anything yet but does cause an incredible amount of outrage.

Much of the discussion lately around boarding hasn't been about the "general" boarding process but rather the much-loved "pre-boarding" process.

When newly merged United and Continental aligned their policies, the combined airline went primarily with the Continental boarding method. This gives priority to uniformed military members, those traveling in the premium cabins and elite members in the frequent flier programs. On some flights, that can be more than half the airplane right there, leaving only the few random stragglers to board at the end. American has also recently moved to a similar pattern.

Some of this is due to the fact that gaining elite status with an airline is pretty easy these days. You can even buy the right to board early on some airlines if you'd like for as little as $9 each way. That has caused the process to become so top-heavy that airlines usually now board the top tier elites first while the lower tier elites board after. Talk about creating a serious hierarchy here.

Whatever happened to the good old days of just boarding by row from the back of the aircraft? Well, airlines got fancy trying to find out ways to speed things up. The faster they can board, the quicker that airplane can get back to where it makes money: in the air. They tried things that sound like cheerleader moves -- the reverse pyramid, for example, which fills people in starting with windows in the back, then moves on to the middles in the back and windows in the middle, then aisles in the back with middles in the middle and windows in the front ... and so on and so on. (The seat map looks like an upside down pyramid as people get on the airplane.)

But when United made its recent changes, it actually went back to boarding by rows, because that was how Continental did it. The move was so unpopular that it recently had to backtrack on that policy. It will now board by "zones." This is easy because people can just look at their boarding passes and board when their number is called.

This is easier for the gate agents to use because they don't need to know exact row numbers for the type of aircraft. And United can dynamically try putting different seat types in different zones if it wants to do testing without needing to make any real changes to the process from a customer perspective. Continental will continue its row method for the near future and then will move to zones.

But in the end, it's not going to prevent people from huddling around the gate, clutching their enormous bags, hoping to find a coveted spot in the bin above their seats. That, apparently, is just human nature.

Do you have questions about boarding or other flight-related issues? Raise them in the comments section below and we'll investigate for future columns.