Catching the 'Wind' in Atlanta

By Jim Auchmutey, Special to CNN 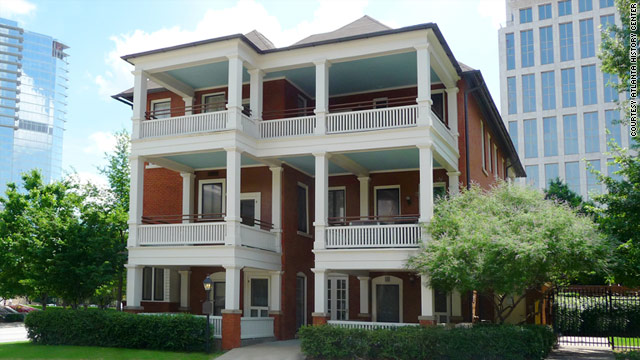 The Margaret Mitchell House in Midtown contains the tiny apartment where "Gone With the Wind" was written.
STORY HIGHLIGHTS

Atlanta, Georgia (CNN) -- Few cities are as identified with a book as Atlanta is with "Gone With the Wind." But locating vestiges of Margaret Mitchell's epic story can be tricky. More than a few visitors have driven down Tara Boulevard, near the airport, and been disappointed to find a landscape that has little to do with Scarlett O'Hara's plantation house and everything to do with the Waffle House.

Atlanta may not possess the antebellum charm of Savannah or Charleston, but if you're willing to look past the modern-day trappings, it has several historic sites that evoke Mitchell's legendary Civil War melodrama. Most of them are staging special events this summer to mark the 75th anniversary of the book's publication in June 1936. Here's an itinerary; follow it, and you'll even catch a glimpse of Tara.

The first stop should be the Margaret Mitchell House, the Midtown apartment building where Peggy Mitchell, a young newspaper reporter, lived with her second husband when she wrote most of her novel. Mitchell called their tiny three-room flat "the Dump," but it's actually rather cute, with its Victrola and its Victorian loveseat. 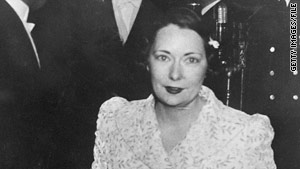 Author Margaret Mitchell at the 1939 premiere of the film adaptation of her novel "Gone With the Wind."

Starting in 1926, she sat at the rear window pecking away on a portable Remington typewriter as she imagined Rhett and Scarlett (or Pansy, as the character was originally called). Mitchell didn't want anyone to see what she was writing and kept a towel close by so she could throw it over the pages to hide them from prying eyes.

The Mitchell House displays the only certifiable piece of the fictional Tara to be seen anywhere: its doorway, part of a set built for the film adaptation. Mitchell described Tara as a rough upcountry plantation house and was peeved when producer David O. Selznick gussied it up. "It grieves me to hear that Tara has columns," she wrote.

The final typescript of the book was long thought to have been burned, according to Mitchell's wishes, but a portion was saved by her publisher and rediscovered recently at a library in Connecticut. Parts of "the lost manuscript" will be exhibited June 4-September 5 at the Atlanta History Center, the city's premiere history museum. The display includes pages from the final chapters, with Mitchell's handwritten editing, as well as rare editions of the book and the desk where she wrote it.

Other glimpses of her writing life are on view downtown at the Atlanta-Fulton County Library, where her typewriter, copy of the movie script and other papers will be exhibited this summer. 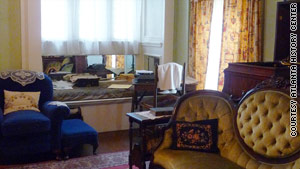 Margaret Mitchell typed the pages of "Gone With the Wind" next to the rear window of her small Atlanta apartment.

There are also two museums in the Atlanta area dedicated exclusively to "GWTW." South of the city in Jonesboro, where the final battle for Atlanta was fought, an 1867 train depot houses the Road to Tara Museum, with costumes and memorabilia from the book and movie. The museum offers a regular walking tour called Southern Belles and Whistles.

North of Atlanta, the Marietta Gone With the Wind Museum is hosting an anniversary weekend on June 10-11 that includes a Scarlett lookalike contest and appearances by several of the remaining actors from the film. Ann Rutherford, who played Scarlett's sister Carreen, tops the bill. Olivia de Havilland, the only surviving principal cast member, is sitting out the anniversary at her home in Paris.

Alas, the Loew's Grand Theater, where Clark Gable and Vivien Leigh attended the movie's world premiere in 1939, was damaged in a fire and demolished more than 30 years ago. The site, which faces Margaret Mitchell Square, now houses the headquarters of the Georgia-Pacific company.

Growing up in Atlanta, Mitchell was enthralled by elders' stories of the war that had ended 35 years before she was born. There were at least five significant battles fought for Atlanta, but modern development has altered most of the sites beyond recognition.

The best-preserved is the Kennesaw Mountain National Battlefield Park, where the Atlanta campaign began in earnest in June 1864. General William T. Sherman's Union army eventually outflanked the Confederates and slipped a noose around the city. 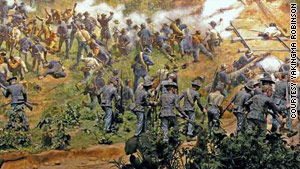 The Atlanta Cyclorama depicts the Battle of Atlanta on a circular canvas.

The site of the actual Battle of Atlanta has largely vanished under a highway interchange, but you can see a vivid recreation nearby, in Grant Park, where the Cyclorama depicts the fighting on a circular canvas that surrounds viewers. Completed in 1886 and billed as the world's largest painting, it's the 19th-century equivalent of 3-D. The battle's 147th anniversary will be commemorated July 15-17 in a weekend of tours, re-enactments, concerts and programs on African-Americans in the Civil War.

Mitchell herself lived 13 years after "GWTW" was published, but never wrote another book. Her life ended tragically, at 48, after she was struck by a speeding taxi on Peachtree Street in 1949.

Oakland Cemetery, where she's buried under her married name, Margaret Mitchell Marsh, is observing the novel's anniversary with a champagne toast at her plot on June 12. Costumed guides will lead walking tours of the cemetery, which includes the marked graves of hundreds of Confederates killed during the Atlanta fighting and also an area for the unknown dead, their resting place marked by an exquisite sculpture of a dying lion.

A tale of two Atlantans

There's one more stop anyone trying to understand Atlanta and the "GWTW" phenomenon should make. Mitchell isn't the only famous person born and buried in the neighborhood. A few blocks away from her grave is the birthplace and tomb of the Rev. Martin Luther King Jr., whose church, Ebenezer Baptist, has reopened after an extensive restoration. The King National Historic Site explores the human rights movement he led, which finally resolved the unfinished business of the Civil War.

King and Mitchell are linked by more than history and geography. When the film premiered in Atlanta, the 10-year-old King sang at one of the galas as part of an Ebenezer choir. A few years later, Mitchell began to lend financial support to students at Morehouse College, the institution that King would soon attend.

Mitchell's interest in black education might surprise people who think of her only as the author of a story that became synonymous with the Old South and its discredited attitudes about race. It seems that the creator of Rhett and Scarlett was looking forward to a New South all along.