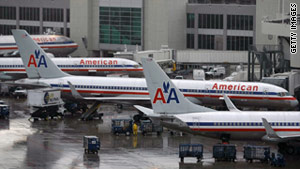 (CNN) -- Salads are off the menu for all American Airlines flights departing from Europe.

In light of the recent E. coli strain scare, American Airlines is pulling "green salads, lettuce and tomato garnishes" to alleviate any concerns its passengers may have.

"We are replacing the salad menu items with other menu options to pre-empt any risk and alleviate concerns," reads an alert on the airline's website.

"We will closely monitor and take direction from the local health authorities and the World Health Organization and return to the original menu when we believe it is safe to do so," American Airlines said.

Other airlines are monitoring the situation. Delta Air Lines has no plans to stop offering salads on flights out of Europe, but the airline is talking to European caterers daily, Delta spokeswoman Chris Kelly Singley said.

Sixteen deaths have been linked with the outbreak: 15 in Germany and one in Sweden. According to the World Health Organization, more than 1,000 people in 10 countries have been sickened by the strain.

Russia also announced Thursday that it would be banning any fresh vegetable imports from the European Union in an attempt to combat the deadly outbreak.

Although the source is still unknown, the outbreak has been traced to cucumbers that were imported to Germany from Spain. Authorities are advising that people avoid raw cucumbers, tomatoes and lettuce in Germany and other European countries.