And America's best beach is ... 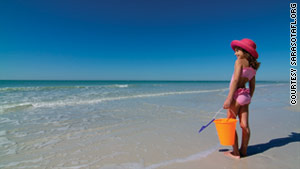 (CNN) -- Heading to the coast this weekend? Take note of the nation's best sandy stretch: Sarasota, Florida's Siesta Beach tops the 2011 list of the top 10 beaches in the country.

The annual list, in its 21st year, is produced by Stephen P. Leatherman, director of Florida International University's Laboratory for Coastal Research.

"Siesta Beach in Sarasota boasts that it has the finest and whitest sand in the world, and I cannot argue with this claim; the powdery sand is nearly pure quartz crystal," Leatherman said in a statement.

Coronado Beach in San Diego and Hawaii's Kahanamoku Beach on Oahu round out the top three.

Coronado is described in the rankings as "the toast of Southern California" with the historic Hotel del Coronado adding its celebrity appeal and Old World elegance.

5. Cape Hatteras in the Outer Banks of North Carolina