Tokyo travel industry on the brink 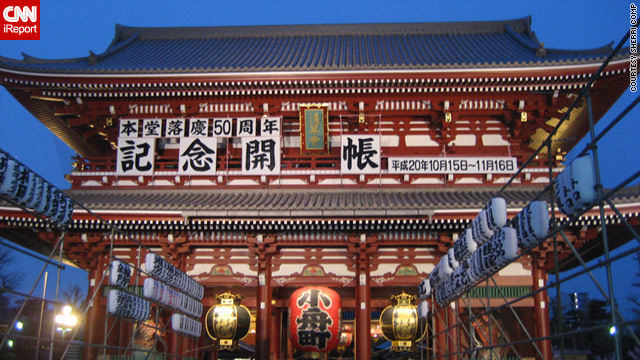 The magnificent Sensoji Temple is a major tourist site in Tokyo. Japan has seen a big drop in visitors since the quake.
STORY HIGHLIGHTS
RELATED TOPICS

All that's missing are the foreigners in this five-star Shibuya landmark that normally hosts tens of thousands of overseas visitors every year.

A lone American couple says they nearly cancelled their trip.

"Our daughter is teaching here -- it if wasn't for that, we wouldn't have come," explains John Heddens, who waits in the lobby with his wife, Mindy, for the airport shuttle .

"My concern is that the government doesn't seem to be forthcoming about the radiation."

Business on its knees

More than eight weeks since the March 11 mega-quake sparked Japan's worst crisis since World War II, tourism is still on its knees. The number of foreign guests staying at the Tokyu is down by half, according to its marketing manager Takayuki Yamano -- a pattern repeated throughout Japan.

Just three months ago, the Japan Tourism Agency was predicting a bumper crop, with over 9 million people forecast to visit the country in 2011 -- up from 8.6 million in 2010.

Statistics from March, the latest available, suggest that figure is not remotely attainable. Year-on-year figures for the month were down by 50.3%, with the number of foreign travelers plummeting from 679,500 to 352,800.

Visitors from South Korea, Japan's biggest source of tourists, were down by 47%, while fully two-thirds fewer Germans came in March.

Few analysts expect a recovery by the summer, despite fighting talk from the commissioner of the Japan's Tourism Agency, Hiroshi Mizohata.

"We do not have the time to lament this situation," he told the Foreign Correspondents' Club in April. "We must restore the image of Japan as a safe, secure nation."

Many potential visitors, however, are not buying Mizohata's message, nor the reassurances of the Japan National Tourism Organization (JNTO), which provides a daily online readout of air and waterborne radiation counts around the country in English, Chinese and Korean.

Even Okinawa, more than 1,600 kilometers (about 995 miles) from the crippled nuclear plant, is a victim of the industry fallout.

"Our numbers are also down by half, mainly from America and the rest of Asia," laments Yong Heo, a manager at Okinawa-based Jumbo Tours, which last year brought 50,000 visitors into the country. "To foreign tourists, Okinawa is still Japan."

Spooked foreigners won't return until their governments give them the travel green light, predicts JNTO spokesman Yoshi Koyasu: "Ninety percent of Japan's foreign tourists come from 15 countries, with Korea and China at the top. Most are still issuing travel advisories."

Hence, the steady stream of Japanese officials traveling around Asia with the official line -- Tokyo is as safe as London or Beijing.

The crisis has had an impact on domestic travel too. Japan's Travel Bureau Foundation (TBF) reported outbound flows down by 18% in March. And Japan Airlines said its Golden Week figures for international and domestic routes fell by 26% and 24% respectively, compared to the same period in 2010.

What all this means, of course, apart from a rough ride for the industry in 2011, is that there are potential bargains for travelers. Like many hotels in the capital, Tokyu has cut its weekend prices for rooms.

Some travel bureaus report promotions offering return Tokyo flights from parts of Asia for as little as $400. The high yen, however, is still likely to cancel out some of the bargains.

Industry analysts are upbeat despite the dismal figures. The influential UNWTO World Tourism Barometer predicts that the impact of the disaster on tourism will be limited to areas directly involved.

"Alternative destinations will pick up the slack," says its latest report.

The TBF says the fall in domestic outbound trips bottomed out by mid-April. Meanwhile, the first batch of post-disaster Thai tourists arrived in Japan on May 12, on a junket partly organized to help out the devastated Tohoku region (200,000 Thais came here last year).

Travel agencies in many countries are already retooling their marketing strategies for the post-Fukushima era.

"Japan is a huge country and there are plenty of other places to travel within it that are not in the disaster zone," says Lucy Balding, marketing executive at Trailfinders, Britain's largest independent travel company.

"Understandably there are fewer people looking to travel there, but I would expect that to reverse itself quite quickly, given our experience with other places. After the Bali bombing, there was a strong rebound."

Hong Kong and other Asian visitors are slowly returning and, "the Chinese will be back soon," he says. But he adds a warning: "Until the nuclear fear is gone, which looks like it will take a few years, it is difficult to see a full recovery."

For now, nobody knows when that will be but American Mindy Heddens, for one, says she will be back.

"What an amazing country," she enthuses. "I love it here. It's like a well-kept secret."