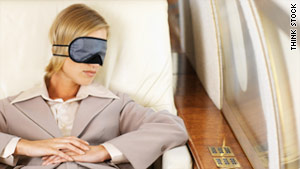 Jet lag is hard to avoid, but there are some ways to decrease the impact of changing time zones.
STORY HIGHLIGHTS

(CNN) -- By the time you read this, I'll be 10 hours and nine time zones away from home, and I'll probably be pretty tired. This kind of trip is routine for fliers around the globe, but actually dealing with the time change is something with which even the most seasoned traveler struggles.

Everybody has their own tricks for dealing with big time changes.

Some travelers and experts suggest that you start getting used to the pending time change as early as you can before you leave on your trip. That's a great plan, but let's be honest: It's unrealistic for a business traveler. You're busy and can't start moving your schedule around a few days early just to help with jet lag.

My solution is to start adjusting as soon as I get on the airplane, but not before. The flight that I just took left in the mid-afternoon, as do most European flights from the West Coast. Airlines will usually serve you a big meal soon after departure, but that's exactly when you don't want to be eating. That's bedtime in Europe.

On flights like these, I usually either skip the meal or just pick at it; having a big lunch can help. The best thing to do once onboard is to go to sleep. If you can knock yourself out right after takeoff, you could sleep for several hours and be ready to start the day with the rest of Europe in the morning.

This, of course, is far easier said than done. If you're flying up front, they'll provide you with eye masks and ear plugs. Those can help a lot, though sometimes I skip the ear plugs for my own soothing music instead. If you're in coach, just bring your own. It's worth it.

I know that for me, the slightest bump will jolt me awake. Even on a smooth flight, I end up staring at the ceiling (or the back of my eye mask) for a while. That's why, if you're like me, you might want to turn to drugs. (I'm talking about legal drugs, of course.) There are plenty of sleep aids out there that can do a great job of pushing you into a slumber.

There are a few other things to consider here as well. First, don't drink on an airplane. I know, I know, there's nothing more relaxing than having a glass of port as you watch the Earth fly by below. It won't kill you to have one glass, but the less you drink, the better.

Aircraft cabins are very dry, and they're pressurized to a fairly high altitude, usually around 8,000 feet up. Because of this, two things happen: You feel drunk faster, because there's less oxygen in your blood, and you get dehydrated much more quickly.

The end result can be a nasty hangover. If you're trying to acclimate to a new time zone, that's not going to help.

For many people, however, the toughest part of the journey is what happens after landing. The goal after landing is to stay awake until a "normal" bedtime in your new time zone. I find this particularly difficult on westbound flights that leave early in the day.

My return flight will have me back to the west coast just after noon, but that's bedtime where I am now. Still, to get back on my home time zone, it's important to stay awake for another eight or nine hours at least.

Regular helpings of Mountain Dew, Red Bull and coffee should help, but that's not the healthiest plan. The middle of the afternoon is usually the hardest. Try to clear some time in your schedule to go for a walk or get some kind of exercise. If none of that works, you can try to pick flights according to how your body will react.

If you're flying from the U.S. to Asia, some flights go all night long while others fly during the afternoon. If you can't sleep on an airplane, you'll probably want the latter so you can fall asleep once you land.

If you're heading from the East Coast to Europe, there are a handful of flights that leave in the morning and arrive at night, so you can avoid flying overnight. Of course, you waste an entire day flying that way, but sometimes it's better to waste one day up front than it is to lose several days to jet lag.

Hopping around the world and changing time zones will take its toll, but there are definitely things you can do to reduce the impact. What are your suggestions for beating jet lag?