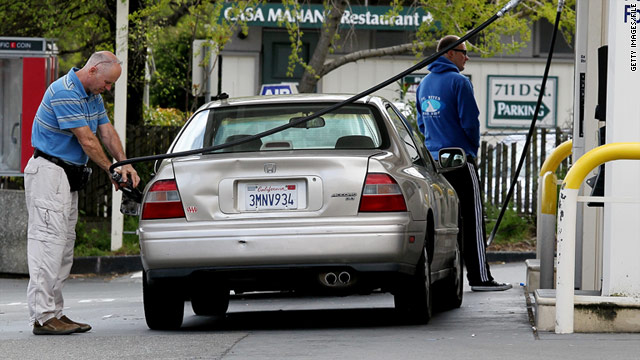 (CNN) -- The average gas price in the United States has hit the $4 mark, just 11 cents shy of the all-time high, according to a survey published Sunday.

The Lundberg Survey found the average price of a gallon of self-serve regular nationwide was $4 on May 6. In July 2008, gas prices reached their all-time high at an average of $4.11.

Based on spot checks the Lundberg survey conducts, the peak may have come in the middle of last week at one or two cents higher, and prices might be starting to drop, said publisher Trilby Lundberg.

CNNMoney: Which states have cheapest gas?

"We may see a drop of a dime or more before Memorial Day" on May 30, Lundberg said.

Explain it to me: High gas prices

Obama: 'We can't drill our way out'
RELATED TOPICS

Crude oil prices "took a dive" at the end of the week, Lundberg said, helped in part by strengthening of the U.S. dollar.

Still, there's no guarantee they won't shoot back up, Lundberg said.

The demand in developing countries has been pushing crude oil prices up in general, as has the weakening U.S. dollar, she said. Libya's loss of production amid the turmoil in the country has also helped push prices up, Lundberg said.

It is not clear whether the killing of Osama bin Laden impacted gas prices, Lundberg said.

In the United States, higher gas prices and continued high unemployment levels have reduced demand at the pump, Lundberg said.

The city with the highest average price in the latest survey was Chicago, at $4.50 a gallon. The lowest was Tucson, Arizona, at $3.62. Different tax levels in different states are a major factor in bringing about diverse prices.