By Brendan Newnam, Special to CNN 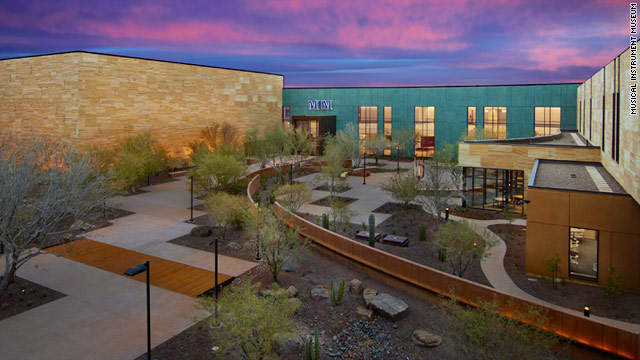 Phoenix, Arizona (CNN) -- "It takes a half hour to get anywhere," said the clerk at the rent-a-car place when I asked him how far from the airport to my uncle's neighborhood in Sun City. He was right. That buzzy restaurant you read about is a half-hour away. The Phoenix Art Museum? Half-hour.

Since a weekend visitor only has so many half-hours -- and since the price of filling up a tank these days rivals the price of a plane ticket -- I decided to highlight the only five spots a visitor need visit to get a sense of the best of Phoenix right now.

A brand spanking new $250 million museum is something you'd expect to find in Abu Dhabi or China these days, not in the sunbaked fallout zone of the subprime mortgage meltdown.

Yet there it sits like a winter home for Apollo, god of music, a sprawling two-story complex covered in sandstone and filled with 14,000 instruments from every corner of the world. The MIM is big, beautiful and bordering on ostentatious. But it's not ostentatious. It's just a shiny new thing in a nation that's been feeling old and shopworn lately.

One glance at an African rock gong or some other ancient foreign instrument dispels those fading empire blues. It reminds us that America is but one lucky part of world civilization. The museum was designed to provoke contemplation of this sort. Part of its stated mission is to "foster global understanding." And it does. But don't fear, the MIM's main mission is celebrating music and the lengths that humans go to make it.

From the humble Croatian goat bladder bagpipe to the Les Paul Goldtop guitar, the instruments on display are not only windows into history but beautiful works of art in their own right. The icing on the cake is the state-of-the-art audio accompaniment that magically activates when you approach a display.

Other highlights include instruments from popular musicians like the piano on which John Lennon wrote "Imagine," a drum set from the Black Eyed Peas, King Sunny Adé's guitar, etc. The MIM is exhaustive -- and a bit exhausting. Fortunately there's a cafe where you can drink beer and tuck into locally sourced food. Just make sure you eat with a companion; you may need someone to lift your jaw off the floor so you can chew: the MIM is mesmerizing.

They may not seem like the most exciting words in the English language, and they may seem oxymoronic to those whose experience with deserts is limited to old episodes of the "Road Runner," but the Desert Botanical Garden is an ideal way to appreciate the Valley of the Sun's natural habitat without packing in bottles of water and reading up on snakebites.

The drive to the garden alone provides picture-perfect desert vistas complete with saguaros, cinnamon-colored soil and rock formations jutting out of the earth. The garden itself features several trails of varying lengths, free tours and a series of exhibits to familiarize visitors with the nearly 2,000 species of cacti.

Park City and the art of après-ski

It turns out these plants aren't nearly as tough and stoic as you'd think. The garden was founded in 1937 to display, protect and preserve what was then thought of as a rapidly disappearing desert habitat.

For better or worse, artists are the shock troops for gentrification. In Phoenix, the Roosevelt District is the front line. Since the mid-'90s creative types have been gravitating toward this formerly blighted neighborhood on the northern edge of downtown.

Today it has all the ingredients necessary for a "cool" neighborhood: Record shop? Check. Galleries? Check. Coffee shop, brunch spot, vintage shops? Check! Check! Check! From a car, the area looks like an unkempt residential district circa 1920, but on foot its bungalows reveal themselves to be storefronts of every sort. A friendly, creative industriousness pervades the air.

And now second-wave establishments like the The Roosevelt Tavern, which sells craft beer in a lovingly restored 100-year-old house, are starting to arrive. Here comes the neighborhood.

Scottsdale was named "the most livable city" in 1993, and it won't let you forget it. Seriously, it calls itself that right on its Welcome sign. Seems odd hanging on to an old title, but in this case it fits: Life is good for the people who can afford to live and visit this affluent, golf-mad metro Phoenix community.

Since no trip to Phoenix would be complete without purchasing something with turquoise on it, head to Old Town Scottsdale, where there are a gazillion jewelry stores, galleries and tsotchke shops.

At beer o'clock head over to the infamous Phoenician resort nestled against Camelback Mountain for a cocktail on the patio. Parking is free, unless you count the tax dollars spent to keep the resort afloat after its creator Charles Keating got caught up in the savings and loan crisis in the late 1980s.

Phoenix has plenty of great places to grab a bite. I recommend the air conditioning.

Pizza Bianco - Overheard: "Mom, this is the place that was on Oprah. Their pizza is great, but there is usually like a three-hour wait."

Rita's Tacos - People say it's the best around.

FnB Restaurant - At the moment, this is the buzziest joint in the Valley.

Local Breeze - An oasis in downtown Phoenix. Includes an outdoor bar with misters, as in light sprinklers designed to cool off humans.

Amuse Bouche - If your 92-year-old uncle doesn't want to roam too far from his house for dinner, take him to this competent French restaurant. But don't let him see the corkage fee or he'll make a scene.