When row 21 is actually row 9: The method behind airline row numbers 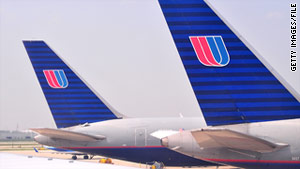 (CNN) -- You wouldn't think row numbering on airplanes would be something worth spending time on, but the new United disagrees. Beginning June 9, the pre-merger United domestic fleet will be getting new row numbers to match the way numbering was done by Continental before the merger. This may seem like a waste of time, but frequent fliers will actually benefit from this change.

Today, United's domestic fleet starts with row 1 in first class. Then coach starts at either row 6 or 8 and counts back from there. On an A319, that means that row 24 is the end of the line. Beginning in June, however, that airplane might seem longer. The last row will now be 34. Is it growing? Of course not.

First class will continue to start at row 1, but now every domestic airplane will have coach starting at row 7 for consistency. And the exit row will now start at row 20, regardless of what row was before it. That means in the new configuration on an A319, for example, there will be a jump from row 12 to row 20.

Consistency can make a big difference in a case like this, especially when airplanes have to be swapped at the last minute. The exit row seats are saved for the airline's most-valued customers because of the extra legroom. So, one of the most important frequent fliers may be booked in that prime exit row window seat, 12A, on one of United's A320 aircraft. But United has two seating configurations on its A320s, so what if the airline needs to change the airplane? Not only is row 12 not an exit row, but it's not even in Economy Plus anymore. That is going to be one unhappy traveler.

Going forward, if that traveler was booked in row 20 in an exit row, he will continue to be in an exit row even if the airplane is swapped. And now anyone sitting in rows 7 through 21 will be in Economy Plus, the rows that provide extra legroom for an additional cost, regardless of the airplane. This will make it a lot easier to please customers when the inevitable aircraft swap happens.

So, although confusing, this odd standardization makes sense for passengers. Sometimes the reasoning isn't quite as practical. Many airlines, for example, avoid row 13, apparently out of superstition. Aeromexico, Air France, AirTran, Continental, Emirates and Singapore Airlines are just a few that honor this practice despite the fact that no airplane has ever crashed simply because it had a row 13.

Other airlines seem to have their heads in the right place, but instead just cause mass confusion. Air China goes completely out of order. On its 747s, you'll find rows 11 through 14 in the nose followed by rows 1, 2, and 3 behind. Why? The airline found first class fits best in the second cabin but it still wanted to make sure row 1 was reserved for those top travelers, despite the fact it's nowhere near the first row.

It's not just row-numbering that causes confusion, but seat-lettering as well. It's almost always a safe bet that any seat with the letter A is a window on the left side, but that's where the consistency ends.

United's Express partners operate two types of similarly sized propeller airplanes for the airline. Both have one seat on one side of the aisle and two on the other. One of the airplanes, however, has A on the left and then B/C on the right. The other has A on the left and D/F on the right. Why? Good question. Different operators choose different conventions and there's no rhyme nor reason from the customer perspective. You just have to be vigilant to make sure you pick a good seat.

Some lettering quirks, however, actually are customer-focused. For example, it's rare to find a seat lettered "I" on any airline, because it can easily be confused with a 1. That may sound strange, but back in the day, TWA actually used numbers for some of its seats. You might find yourself in 10-1 instead of seat 10A. Fortunately, those days are long gone.

In the end, while the airlines may be making changes to make things easier, it doesn't always end up being easy to understand. Use a site like SeatGuru.com to make things more clear. If you're still lost, ask a flight attendant. They can always point you in the right direction.