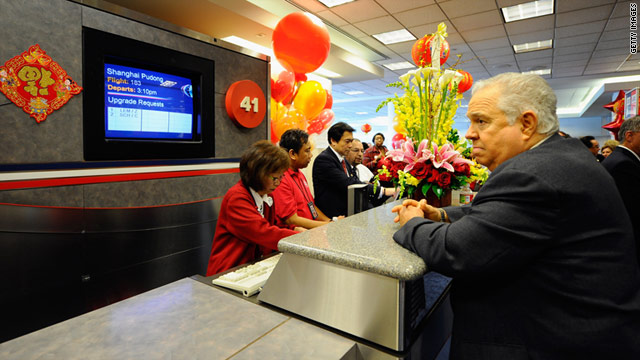 Getting bumped is now going to get you a lot more money than before, but fares could also rise.
STORY HIGHLIGHTS

(CNN) -- Last week, the Department of Transportation released a slew of new rules that will affect the air travel experience. One of the more interesting changes? Getting bumped is now going to get you a lot more money than before.

Unfortunately, this also means fares may end up rising.

Nearly every airline sells more seats on each flight than it actually has on the airplane. Why? Because people just don't show up.

DOT to airlines: No hidden fees

The airlines have a ton of data that show how many people fail to take their scheduled flights, and they use that to determine how many seats to sell over the actual capacity of the airplane. More often than not, they do well here, but it's not an exact science.

Sometimes, too many people show up, and some can't fly. The first thing an airline does when that happens is try to get volunteers. There are plenty of people out there who would be more than happy to volunteer in exchange for a voucher to use on a future flight, and they do just that.

Travel tips from a ticketing agent

Travel tips from the ones who know best
RELATED TOPICS

During all of 2010, the largest U.S. airlines carried more than 595 million passengers. Of those, about 680,000 people volunteered to give up their seats. Those are happy people.

But then there's the other side. Sometimes, airlines simply can't get enough people to volunteer to get off the airplane.

For example, a flight from Wisconsin to Los Angeles the day before the Rose Bowl last year would not have been an easy flight for finding volunteers. In those cases, people have to get bumped involuntarily. That's not good.

For all of 2010, there were 65,000 people who got bumped that way, and they weren't happy at all. But, they did get some excellent compensation.

The rule is that if you get bumped and the airline can get you to your destination within two hours of your original scheduled arrival time, you're entitled to cash equal to the value of your one-way ticket, with a max of $400. If you get there more two hours late, you get double the value, up to $800. Not bad, huh?

That's big money, and it's bound to ease the pain of getting bumped for at least some of these people. There's no doubt, however, that anyone who is bumped involuntarily is not a happy camper.

Many wonder why the Department of Transportation simply doesn't prevent bumping at all, but there's a downside to that. Having the ability to overbook means that the airlines can keep fares lower.

Think about it. If you have a 150-seat airplane and sell 150 seats, you need a certain amount of money to cover your costs. But if you can sell, say, 155 seats, then that means prices per seat can be lower, and the airline can still cover its costs because it sells more tickets.

Since a number of people don't take the flight they book anyway, this makes sense. If overbooking was stopped, then one of two things would happen at most airlines: Either fares would rise, or flights would start to disappear because they were no longer profitable.

We'll probably see this to some extent, even with the increased level of compensation that is going to be law by the end of the summer. The higher cost of overbooking means airlines will be more conservative.

None, however, will be as conservative as JetBlue. That airline continues to avoid overbooking, as it has since it started. But when it started, all its fares were non-refundable, and it was mostly a leisure airline.

With refundable fares and business travelers, there are probably enough people not showing up that the airline could start overbooking. That should result in lower fares.

In the end, nearly everyone benefits from overbooking. Fares are lower, and volunteers can make out like bandits.

It's just those 0.01% of travelers who are bumped involuntarily who suffer. But now, they'll suffer with a big wad of cash in their pockets.