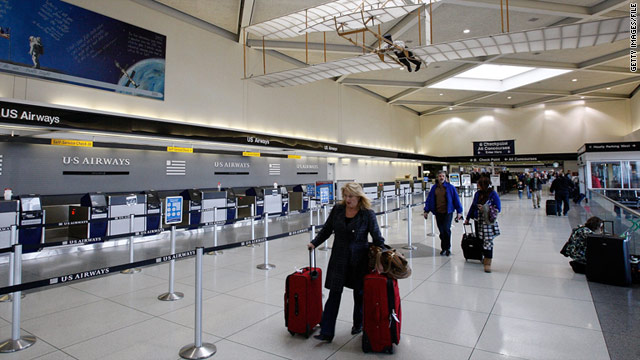 (CNN) -- A report detailing the death of a North Carolina teenager who stowed away in the wheel well of a US Airways flight has found there are not enough security officers at the Charlotte Douglas International Airport in Charlotte, North Carolina, one of the fastest growing airports in the country.

The report by the Charlotte-Mecklenburg Police Department found security staffing did not adequately reflect the size needed for such an airport, an issue of increasing concern among police and security agencies across the country as they attempt to balance budget shortfalls and tighter security requirements.

The heavily-redacted, six-page investigative report -- reviewed by the Transportation Security Administration and Charlotte authorities -- was prompted by the death 16-year-old Delvonte Tisdale, who authorities say stowed away November 15, 2010, on a US Airways flight bound for Boston from Charlotte.

Tisdale's body was later discovered along a flight path in Massachusetts. He was believed to have fallen out of the wheel well while the plane was preparing to land at Boston Logan International Airport.

"In my opinion, the current law enforcement agency at the (Charlotte) airport does not adequately reflect the type, size and functions of an organization that should be in place at a major metropolitan market," Maj. Glen Neimeyer of the police special investigations bureau wrote in the report first made public Tuesday.

The report conceded that "any suggestions or recommendations provided will quickly translate into an unanticipated expense for the airport and ultimately the City of Charlotte. The decisions on whether, or what, to implement will ultimately come at cost." The report did not say how much it would cost to implement the proposed changes.

The report recommended assigning more police officers to the airport and assigning emergency medical personnel rather than relying on police as first responders. It also recommended increasing electronic monitoring in and around the airport.

The report found Tisdale did not go through any security checkpoints at the airport nor did he climb into the wheel well while the plane was parked at the gate. Though the report redacted much of the detail investigators discovered about how Tisdale managed to get on to the plane, it did say the plane pulled back from the gate and sat on the runway for some time before it took off.

An attorney for Tisdale's family said the report did not go far enough.

"You mean to tell me all you have is six pages of a report? To me, that only highlights the negligence of security there. There's not even enough security to document when things go wrong," Christopher Chestnut told CNN affiliate WSOC.

Charlotte police and the TSA, citing security, refused to comment on specific changes adopted by the airport.

Police spokesman Robert Tufano said Wednesday that a number of the recommendations made by the report have already been put in place by airport officials. He said others were expected to be "resolved in short order."

"I believe it would be fair to say the travelling public probably would not notice anything glaring as these changes are advanced," Tufano told CNN.

The airport -- a hub for US Airways -- was named in 2010 by The Airline and Airport News Network & Analysis as one of the fastest growing airports in the country. It is the eighth busiest airport in the nation, according to the Department of Transportation's Bureau of Statistics.