Park City and the art of après-ski 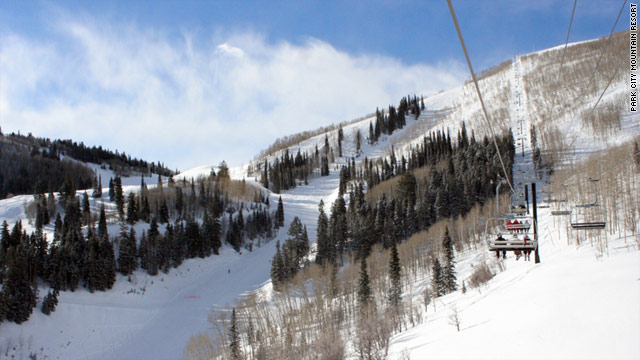 Park City, Utah (CNN) -- At its best, driving in Los Angeles is like driving backward into a parade. So, when my lady and I set out for the airport during rush hour, getting choked in traffic was inevitable. Yet, a quarter-mile later, we were still moving at a brisk clip.

Which brings me to one of my cardinal rules of travel: Think inside the box.

Here's how it works: When traveling during peak travel times -- Thanksgiving, spring break, even for the weekend -- schedule your journey at the most "inconvenient" time.

This is because despite what we've learned from reality television, Americans aren't nutjobs. They're smart. They think outside the box. They tweak their schedules to avoid the big rush. They leave a day early or catch the red-eye. Which means peak times can be easy sailing.

"So this 'think inside the box' philosophy has nothing to do with the fact that you waited to the last minute to buy tickets?" my girlfriend said, peering over a limp piece of airport pizza.

"Nope. It was part of my plan all along."

Last ski weekend!
This weekend marks the end of the extended Park City ski season. Park City Mountain Resort and The Canyons will close on April 17, a week after Deer Valley.

And away we went to Park City, Utah, the former mining town, the schmancy ski resort, the home of the Sundance Film Festival. Like many Rocky Mountain ski towns, Park City's vibe is part snowhemian, part Patagucci. You can window shop for things you can't afford and then crack wise about it at the local independent coffee shop.

Oh, and there's skiing. Three amazing resorts full. My girlfriend's family, who was hosting us, hails from California, so they're as comfortable with powder under their skis as they are with sand between their toes.

Me? I grew up outside Philadelphia. So when I think "downhill," I think school systems. Accordingly, instead of skis, I brought three books and "National Lampoon's Vacation/European Vacation" double-feature DVD. As it turns out, I used these things exactly never.

Is skiing something one should start doing in one's 30s? Does it make sense to start testing my body now, after decades in which playing cards was the height of my athletic activity?

These questions ran through my mind, as well as this great American paradox: Now that I'm old enough to afford health insurance, I'm old enough to know that hurdling down a mountain on two slick sticks makes as much sense as strapping acoustic guitars to my feet and jumping off a roof.

"You skiing?" my girlfriend asked.

"I think I'll hang here and practice sleeping," I said.

"It's like a post-ski happy hour where you sit in front of a fire and drink cocktails and relax."

"Well, I've always thought mountains looked cool in pictures," I said, grabbing my parka and heading to the door.

So convinced of skiing's addictive power, the resorts in Park City offer a special lesson/ski lift package for first-time skiers. Thus, before I knew it, I was on top of a frozen mountain, feet in boots the size of Honda Fits, trying to decipher my instructor's Romanian accent through multiple layers of polar fleece.

"Does 'après-ski' really require this much 'ski'?" I wondered

But soon, I was zigzagging around the slopes like an old pro. And when I say "old," I mean nonagenarian. I went very, very slowly, and despite the occasional 10-year-old using my crumpled body as a mogul, I made it through the day with little more than a bruised ego.

But, man, did I excel at après-ski.

We parked ourselves at High West, a handsome whiskey distillery, restaurant and saloon built in a turn-of-the-century house and livery stable on the edge of town. Within minutes, we were slaloming between gooey fondue bites and sips of house whiskey.

We then moved up the street to Butcher's Chop House, where we ate prime rib the size of trash can lids. That night, my legs throbbed like two lighthouse lights, and I dreamed that I was on a ski lift traversing a giant lake of molten cheese.

For our last day, we decided to give our knees and wallets a rest. We packed a picnic and went for a drive. While surveying the tony Deer Valley Resort, we glimpsed the new St. Regis hotel and decided to investigate.

Is it OK to have a crush on a funicular? Because I do. Picture a roomy elevator with leather banquettes and windows that frame a panoramic view of the breathtaking Wasatch Mountains. It's the only way the public can visit the St. Regis resort, and that's fine by me.

The funicular opens up onto the lobby of a posh grill owned and operated by famed chef Jean-Georges Vongerichten. Once at the top, my girlfriend and I were eager to hike. She along a snowy elk trail that necklaced the valley. Me from the funicular to the bar.

The bloody mary as we know it was invented at the original St. Regis hotel in New York in 1934, the hotel claims. In honor of that brunch-changing event, every St. Regis hotel has its own signature version of the drink.

The Park City version uses local vodka and wears a green cap of wasabi and celery mousse. But the coup de grace is a squeeze-bulb stir-stick filled with a Worcestershire/Tabasco sauce blend that lets you regulate the spiciness of your drink. It looks kind of like an IV, which is appropriate for a cocktail that people normally start consuming first thing in the morning.

"You know, instead of covertly eating our picnic, it would be easier if we just ordered lunch here," I said, eyeing a hanger steak being delivered to a nearby table.

"Yeah, but we already have the leftovers," my girlfriend said, patting the Tupperware boxes carrying our premade lunch. "You said yourself that you didn't want to get suckered into paying for another overpriced meal in a tourist town. This way, we can admire the view and save money."

"I know, I know. But maybe we should think outside the box on this one," I said, licking my wasabi and celery foam mustache.