9 hidden man-made wonders of the world 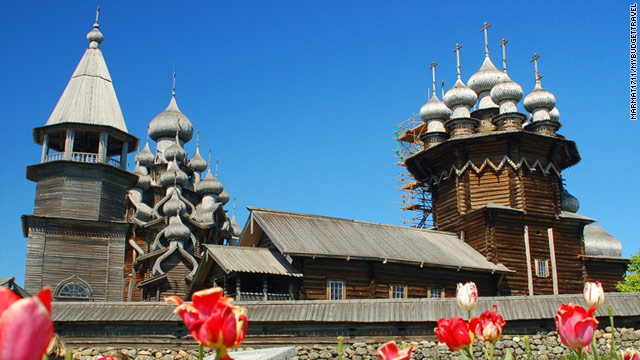 Kizhi Island in northern Russia is an open-air museum with a cluster of churches at its southern tip.
STORY HIGHLIGHTS

(Budget Travel) -- Not all of the world's wonders get the attention they deserve. We searched the globe to find nine marvels that are so awe-inspiring, you'll find it hard to believe that they were crafted by human hands -- and so far off the beaten path, chances are you've never heard of them.

Medieval churches made out of volcanic red rock: Lalibela, Ethiopia

This collection of 11 medieval churches in the small mountain village of Lalibela is a place of worship, which is why more hasn't been done to market it to tourists. You don't have to be devout, however, to marvel at their unusual design. Legend has it that a visit to Jerusalem in the 13th century inspired King Lalibela to rebuild the holy city in Ethiopia. Workers were commissioned to carve these churches out of the area's red volcanic rock. One remarkable group of four -- the House of Emmanuel, House of Mercurios, House of Gabriel and House of Abba Libanos -- was created from the same massive piece and connected by underground passageways.

Built during the 7th century, the 52 standing temples of Sambor Prei Kuk are part of the remains of the former capital of Chenla, an ancient kingdom that once ruled much of present-day Cambodia. Spread across three square miles of jungle in Cambodia's Kampong Thom province, the complex predates even the oldest temples of Angkor by some 600 years. Amazingly, it's also far beneath the radar of most travelers -- a meager 5,000 annual international visitors make it out to this destination, compared to the million-plus tourists who visit Angkor Wat (perhaps because getting to Sambor Prei Kuk entails a three-hour drive from either Siem Reap or Phnom Penh along a bumpy, stray-dog-ridden route).

The stone temples on these small Mediterranean islands wedged between Sicily and Tunisia don't get much attention these days. But as far back as 5000 B.C., they were drawing hordes of worshippers. Hagar Qim, the grandest temple complex, commands attention from its hilltop location on Malta's southern coast. It was constructed from enormous limestone slabs raised to form doorways with lintels (similar to those at Stonehenge) and semicircles. Hagar Qim's best statues were excavated in the mid-20th century and are now housed in Valletta's National Museum of Archaeology. But you'll still find carvings of spirals, animals, and goddesses -- all the more impressive given the builders' limited tools: flints and obsidian blades.

Located in the eastern region of Uttar Pradesh in India is this maze-like palace complex, a blend of European and Arabic architecture and the brainchild of 18th-century ruler Nawab Asaf-ud-Daula. Bara Imambara's magnificent central arched hall-which stretches 50 meters long (roughly half the length of a soccer field) and about three stories high-is held up, amazingly, without any pillars, girders or beams, but with interlocking brickwork. Another one of its mysteries is the Bhulbhulaiya, a dense labyrinth of more than 1,000 narrow stairway passages meant to thwart intruders -- some stairways lead to abrupt drops, others have dead ends. Roam around the secret maze, preferably with an approved guide, and explore the adjacent mosque and manicured gardens.

These 15th-century ruins, which consist of a central plaza and dozens of slope terraces built some 6,000 feet above the glacier-fed Apurímac River, received fewer than 7,000 visitors in 2006. That's just a little more than 1 percent of those that made the trek to its far more famous sister site, Machu Picchu. But at its height, Choquequirao was no less significant: It was roughly the same size as Machu Picchu and believed to be the last main religious center of the Incan Empire before its fall. From the tiny town of Cachora (about 100 miles from Cuzco), getting to Choquequirao is an arduous 20-mile trek. You'll pass arid country full of cacti and agave before the vegetation turns lush; the jagged, snow-capped Vilcabamba Range hovers in the distance.

Budget Travel: 10 islands to see before you die

Shah Abbas' masterpiece capital of the Persian Empire (circa 1600) remains hidden in plain sight -- at least for Americans, who are largely restricted from and cautioned against visiting Iran. The Shah's massive building centered on grand Naqsh-e Jahan Square, which he surrounded with four monumental structures: the gleaming, mosaic-tiled Royal Mosque to the south, the Portico of Qaysariyyeh to the north, the Mosque of Sheykh Lotfollah to the east, and the magnificent entrance to Ali Qapu palace and the royal gardens to the west. Ali Qapu's grand covered balcony was where the shah and his guests would watch polo matches, horse races-even public executions. Inside, spiral staircases connect each floor, walls are adorned with intricate murals, and a Music Room is covered with ornately decorated stucco niches and cutouts.

It requires a flight or overnight train ride from Moscow or St. Petersburg and then a ferry ride to reach Kizhi Island, on northern Russia's remote Lake Onega. Your reward is the one-of-a-kind State Kizhi Museum, made up of nearly 90 wooden structures, including chapels, windmills, and granaries. Its most remarkable portion is Kizhi Pogost, a walled enclosure that houses an octagonal bell tower and two 18th-century wooden churches. Twenty-two cascading bulbous cupolas fashioned from aspen shingles top the 121-foot Church of the Transfiguration of Our Savior -- built, amazingly, without a single nail. Legend has it that a sole axe was used to carve its shingles and interlocking corner joinery, and after its completion, was tossed into the water so a similar marvel couldn't be built.

A Buddha so large it took 90 years to build: Sichuan, China

It took almost the entire 8th century to carve the 233-foot-tall Leshan Giant Buddha out of a mountainside in central China -- about 1,400 miles west of Shanghai (and far out of sight and mind for most travelers -- but the result still stands as one of the world's largest Buddhas. Its ears alone are more than 23 feet in length (that's the height of a two-story building), and even its smallest toe is large enough to sit on comfortably. Thrill seekers can get up close to witness the Buddha's sheer size by navigating down a steep, 250-step zigzag path along its side; those looking to take in the statue from a distance can opt for a boat ride-the statue sits at the confluence of three rivers.

The little-known Mirador Basin, hidden among 2,000 years of jungle growth in northern Guatemala, is called the Cradle of Maya Civilization -- and for good reason. Its five Preclassic Maya cities -- El Mirador, Nakbe, Xulnal, Tintal and Wakna -- are each larger and older than the nearby (and far more famous) Tikal by at least 1,000 years. Among their astounding innovations are super-size temples and pyramids, including La Danta, the largest-known pyramid in the world measured by volume, and the remains of the world's first highway system. And there may be more to uncover: Just two years ago, archaeologists discovered a massive limestone frieze that dates back to 200 B.C.