Editor's note: Daniel Fahl is a captain for a major U.S. airline. He has been a pilot for 11 years.

(CNN) -- If you listen closely to the important safety briefing on your next flight, you'll learn that in the unlikely event of a loss of cabin pressurization, oxygen masks will drop from overhead.

This situation is indeed highly unlikely when considering the tens of thousands of daily flights in the United States that land without incident.

But airplanes, like cars and everything else mechanical, do occasionally encounter problems as we saw on Friday when a Southwest Airlines aircraft developed a gash in its fuselage during flight.

In this case, and in most in-flight emergencies, the design of the aircraft and the intensive flight-crew training make these incidents survivable. These same emergencies often become tools that re-shape procedures and designs to prevent the same problems from recurring.

Take for example the infamous Aloha Airlines incident in 1988 when an 18-foot section of a 737 fuselage tore off in flight, resulting in one fatality and numerous injuries. This incident, caused by metal fatigue, prompted the FAA to implement new, more regular aircraft inspections, as well as the aircraft manufacturer to re-engineer how the fuselage was made.

FAA to mandate inspections of 737s 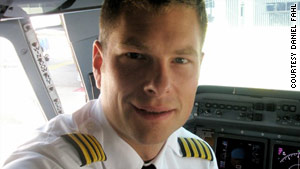 Captain Daniel Fahl has been a pilot for 11 years.

Although it will take time for an official cause of the recent Southwest incident to be released, that part of the safety briefing I mentioned earlier -- that is, a loss of cabin pressure -- certainly came into play here.

There's a misconception that oxygen is pumped into aircraft cabins because there isn't enough oxygen for us to breathe at high altitude. In reality, the same percentage of oxygen exists at high altitude as at sea level. But as altitude is increased, there is less pressure, which in effect leads to less oxygen available in a given breath.

Because of this, aircraft are pressurized to simulate a lower altitude inside the cabin. As an aircraft climbs to a high altitude, the cabin is pressurized, and as it descends for landing, it is gradually de-pressurized.

This is similar to inflating a balloon, followed by letting the air out.

This cycle occurs many times daily for most commercial aircraft and can eventually, over many years of climbs and descents, lead to weakening of the fuselage metal.

Because of this, aircraft undergo maintenance inspections with high-tech equipment that is designed to detect metal weakness in its early stages. In the rare event that undetected weakness gives way in flight, the fuselage is designed to precisely tear in a way that allows for a controllable loss of pressure -- preventing a large hole from forming, as did in the 1988 Aloha incident.

If this does occur, sensors in the cabin detect the pressure loss, releasing oxygen masks above each passenger. A sudden loss of pressurization is an emergency that pilots simulate and engrain into their minds many times in training.

Some emergencies allow for a slow and methodical response, but this particular situation requires an instinctive reaction from memory. Priority No. 1 is restoring the ability of the pilots to breathe properly. In the cockpit, pilots have quick access to emergency oxygen masks, and are trained to put them on in mere seconds. Priority No. 2 is quickly and safely descending the aircraft to a lower altitude.

Consideration must be given to other aircraft nearby, and any terrain in the immediate area so as to avoid a collision. The pilots have cockpit instrumentation available to them to analyze these factors so that safety is never compromised.

Until the official cause of this latest incident is released, we won't know what the FAA and Southwest Airlines will do to fix the problem. However, proactive steps are already being taken by both parties, as similar aircraft models in the Southwest fleet have been grounded for intensive inspections. If problems are found and can be fixed safely, the aircraft will be able to fly again. If the problem is beyond repair on some aircraft, they will more than likely be retired.

Despite the white knuckles that this unfortunate event caused, systems and procedures put in place to deal with this type of emergency allowed for a very successful outcome.