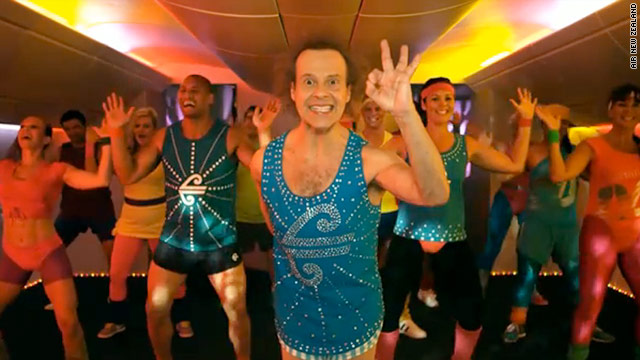 (CNN) -- If you're about to fly through the air at 30,000 feet, it stands to reason that the safety briefing might be something you'd want to watch closely. Reasoning aside, most people pay no attention, thinking they know everything already.

To fight this big attention lapse some airlines are getting creative and involving celebrities, animation, and yes, a little nudity.

Admit it. As soon as you hear the words "Before we depart, please remove the safety card and follow along," you do anything but. Why is that? Because people assume that the directions are all the same, and there's nothing new to be learned.

The formula is pretty straightforward -- fasten seat belts, note the exits, oxygen masks, life vests, a no-smoking warning and you're on your way. But there are differences worth noting. I always count the number of rows to the nearest exit just in case I need it, and I make sure that I know how to operate the doors at those exits. Even if you know these things, it's always good to pay attention just as a refresher, because you never know when you'll need the knowledge.

In fact, it's come in handy more than once in the last few days. We all know now about the Southwest 737 that developed a hole in the fuselage in flight. Being aware of the location of the oxygen masks and the fact that the bag doesn't inflate when it drops down even though oxygen is flowing would be helpful in this case.

Then there was the United flight from New Orleans that returned to the airport Monday because of smoke in the cockpit. Passengers evacuated that flight after an emergency landing. Nobody was injured seriously in either of these incidents, but it's still important to know what to do and when to do it so you can get out as quickly as possible.

The bottom line is you need to know what to do in a split second, and that safety demonstration puts it back at the top of mind. But when you've heard the same thing a million times, it's tough to watch.

Some airlines have subtly tried to grab your attention. Delta, for example, had the now-famous flight attendant dubbed Deltalina star in that airline's safety video. One shot where she wags her finger and proclaims that "smoking is not allowed" had people buzzing over the suggestive sexiness.

Others, including Virgin America, have gone the animated route. Using this strategy lets them add some humor with unlikely situations, including one with a seatbelt, a matador and a bull. And using animation looks different enough to grab some attention regardless of the routine content.

Qantas has recently decided to go with star power to get your attention. The airline's ambassador, John Travolta, is now the star of the safety video, though rumblings have been reported from employees about not having a real Qantas pilot deliver the message.

When it comes to the king of attention-grabbing safety videos, however, nobody beats Air New Zealand. What started with a quirky safety video featuring employees covered only in body paint has become a series of off-the-wall videos. That "Bare Essentials" video was followed by a rugby-themed piece, a video starring the airline's dirty muppet-esque mascot Rico, and now, most recently, one starring flamboyant fitness guru Richard Simmons.

People are definitely paying attention, more so on the ground than in the air. Air New Zealand's "Bare Essentials" video has more than 6 million views on YouTube. The Richard Simmons "Fit to Fly" demonstration passed 1 million views within only a couple of days.

Fuel hedging no guarantee for airlines

But are people really paying attention on the airplane itself? And is the message getting through? I have no doubt people stay glued to the video the first time they see it. But if you're a frequent traveler having to listen to recurring disco music combined with Richard Simmons' voice, you might be reaching for your earplugs.

On top of that, some critics say these light-hearted videos downplay the importance of the safety information inside, but Air New Zealand doesn't see it that way.

"Safety is paramount and non-negotiable at Air New Zealand, and Fit to Fly will again get our passengers sitting up and taking notice of these important pre-flight messages in an engaging and fun way," said spokesman Mike Tod.

What do you think? Are these eye-catching videos any more effective at informing passengers in the long run?