Adventures of the 'female Indiana Jones' 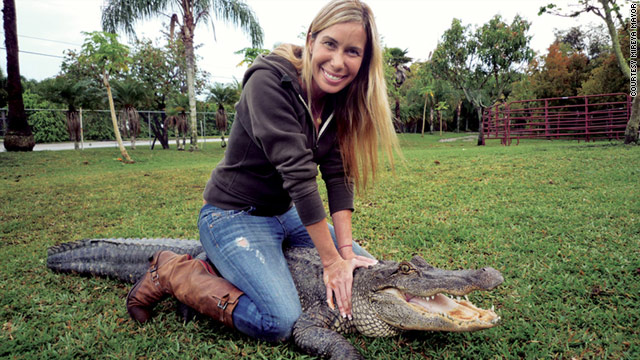 (CNN) -- High above the jungle of Guyana, an explorer sat perched on a narrow ledge on the side of a mountain so ancient and mysterious that it's known as "the lost world."

One wrong move could mean a catastrophic fall, but the visitor was intent on staying for a bit. So a fragile tent went up, hanging by a single pin attached to the cliff wall of Mount Roraima.

Already jittery, the explorer couldn't sleep. Then a spider the size of a dinner plate showed up.

Welcome to a day in the life of Mireya Mayor, Ph.D.

In her treks around the world, she has discovered the world's smallest primate in Madagascar, swum with unusually aggressive sharks in Mexico and chased after giraffes in Namibia.

She's also drunk cow blood in Tanzania, shared a raw goat kidney with the Maasai warriors of Africa and ingested leaves to calm down an angry 400-pound silverback gorilla in Congo.

The life of an explorer

Mayor, 37, recounts her transformation from a sheltered Cuban-American "girlie-girl" growing up in Miami to a worldly animal expert in her new book, "Pink Boots and a Machete: My Journey From NFL Cheerleader to National Geographic Explorer."

Her exploits have earned her the nickname "the female Indiana Jones," but the fashion-loving Mayor always packs an accessory Harrison Ford's character never would: a black dress -- "should an unforeseen occasion arise," she writes.

Mayor, who has two young daughters and is expecting twin girls in July, recently talked about her adventures with CNN.com. The following is an edited version of that interview.

CNN: What draws you to these remote, difficult, dangerous parts of the world?

Mireya Mayor: The animals. A lot of the places you just described, which are the remote oftentimes dangerous places, is where you find the most biodiversity, the rarest of animals that are on the verge of extinction and that we know very little about precisely because of their location.

So that's what draws me to it, not so much the danger. I'm not an adrenaline junkie.

CNN: You have all these different nicknames: the female Indiana Jones, the real-life Lara Croft, the female Steve Irwin. How do you feel about that?

Mayor: I don't have a problem with it.

I think that it's pretty clear by the names you just put out there that there aren't a lot of women who do what I do. 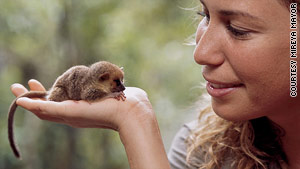 In 2001, Mireya Mayor discovered the mouse lemur, the world's smallest primate, in Madagascar.

People need an image they can relate to and everyone knows Indiana Jones and Steve Irwin, and so I think by just attaching the word female in front of them, it lets people get an instant connection to what I do.

CNN: What has been your favorite expedition so far?

Mayor: Probably spending time with the Western Lowland Gorillas in Congo and also just trekking across Tanzania while I was doing "Expedition Africa," which was a reality show where we retraced the steps of [Henry Morton] Stanley's search for [Dr. David] Livingstone. That was an unbelievable experience.

CNN: You fly on many different airlines in remote parts of the world. What's that like?

Mayor: Unpredictable, I suppose is the word that comes to mind. A lot of these flights get canceled the last minute for any reason -- they don't really need to give you one, things just happen. So you have to be willing to go with the flow and not have your heart too set on traveling any one day. You have to be able to go with it.

Other than that, I have found people to be really very friendly and the flights to be the same.

At some of these airports, you [might] see a chicken inside the airport or running on the tarmac with dogs and that sort of thing. Some of these places don't even have a landing strip. You have to be willing to sort of release your expectations of what you know and be open to the unexpected and exotic.

CNN: You survived a plane crash in the Congo. How did you ever get on a plane again after that?

Mayor: That wasn't so easy. I must admit that I started becoming a rather nervous flier, which I had never been. In fact, I was an extremely good traveler where I could just fall asleep in any position on any flight.

After that, my heart rate would definitely go up when I knew it was time to go catch a flight. But then you have to really think rationally about what the probability is of being in a plane crash. So I feel like if I survived that one, hopefully I beat those odds, it will never happen again.

CNN: Did you ever find out the cause of that crash?

Mayor: One reason we were given is that they actually ran out of gas. The truth is I don't think I'll ever know what happened. But that was one possibility.

CNN: You seem to encounter tarantulas a lot on your trips. What should a traveler do if they encounter a tarantula? 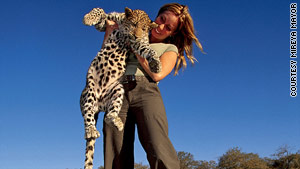 Mireya Mayor says this young leopard adopted by a vet in Namibia was like a big house cat.

Mayor: It depends on the proximity to the tarantula, but normally you don't really need to do much. Tarantulas don't really want to hang out with humans so normally you just have to be aware that they're there and then not get any closer.

I haven't had a tarantula bite me, ever. Because they're big and hairy and just not cute looking, I think they get sort of a bad rap by just showing up. But they're not aggressive animals.

CNN: You wrote at one point that you actually played with them. How do you do that?

Mayor: I had one in South America, for example. I remember I had it sitting on my hand and then it started climbing up my arm and then it went on top of my head and the locals thought it was hilarious.

CNN: You keep going back to Madagascar. Why do you love it so much?

Mayor: For a traveler, it's a really, really beautiful place. For a biologist, it's really a dream come true because of all the amazing endemic species that are found nowhere else on the planet.

I find that the people are extremely warm and friendly and I just think it's such a lovely place.

CNN: When traveling in Guyana, you were struck by Kaieteur Falls, which you write are about five times higher than Niagara Falls and one of the most powerful waterfalls in the world. What is it like to be there? 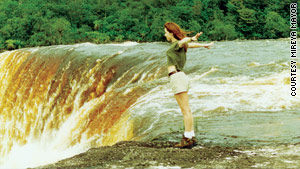 Mireya Mayor gets close to the edge of Guyana's Kaieteur Falls.

I think if we were anywhere else in the world, there would be ropes telling me to stand back but I think that's when it would lose that magic.

It's such a sight worth seeing, it's so beautiful and it's right on the jungle's edge.

It almost looks like you're on the edge of the Earth, really. Very, very pretty spot.

CNN: Do you ever enjoy traveling to industrialized places or do they bore you?

Mayor: Oh, no. I still like my comforts and I still think that traveling domestically can be a lot of fun, for sure. It doesn't just have to be expeditions. In fact, for me it's a nice break to do something more tame.

CNN: What are your favorite places to vacation when you have time off?

Mayor: I love being near the water. So anything Caribbean, like Turks & Caicos I absolutely love. I love Hawaii, I think Costa Rica is a fun mixture of both adventure and the beach.

CNN: Where would you like to go where you haven't been yet?

Mayor: I think I would have to say Antarctica or Alaska. I haven't been to the cold places yet.