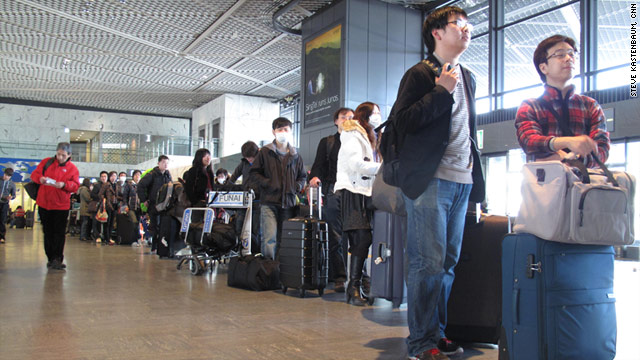 People line up to leave Japan at Tokyo's Narita International Airport. Delta is reducing flights to Japan on a drop in demand.
STORY HIGHLIGHTS
RELATED TOPICS

(CNN) -- We're just three months into 2011 and it's been one blow after another for the travel industry -- not even considering blizzards and the soaring price of fuel.

A natural disaster in Japan and political unrest in North Africa and the Middle East are forcing many vacationers to cancel their plans or are understandably making them leery about booking new trips to troubled regions.

That, in turn, has travel companies scrambling to adjust to the new realities of travel advisories and fast-changing world conditions. For some, it means millions of dollars of lost revenue.

This week, two companies shared their projected losses from the crises.

Delta Air Lines is seeing a fairly significant drop in demand and bookings to Japan as the country struggles to cope with the aftermath of an earthquake, tsunami and nuclear crisis, said Ed Bastian, the carrier's president.

The airline is reducing its capacity in Japan by 15 to 20% through May by cutting the number of flights to Tokyo's Narita International Airport -- a Delta hub -- and suspending service at the city's Haneda Airport, Bastian said Tuesday at the J.P. Morgan Aviation Transportation and Defense Conference in New York.

The Tokyo market generates more than $2 billion a year for Delta, so the disruption may cost the company up to $400 million, Bastian said. The airline is monitoring the demand, however, and is ready to boost service as needed.

"We will not pull out of Tokyo," Bastian said.

Meanwhile, the political unrest in parts of North Africa and the Middle East -- including an uprising in Egypt, anti-government protests in Bahrain and a revolt in Tunisia -- is having an impact on cruises.

Carnival Corporation, which operates brands such as Carnival Cruise Lines, Holland America Line and Princess Cruises, said there was a significant slowdown in demand for voyages to that part of the world.

More than 280 cruises had to be "reset" -- or given new itineraries -- and the company estimates this disruption to its business will result in about $44 million of lost revenue, said Howard Frank, Carnival's vice chairman and chief operating officer, during an earnings conference call on Tuesday.

"We pulled out of just all North African stops, in Tunisia and Morocco and Egypt, and we've pulled out of -- actually, in some cases, we've had to pull out of Israel because we got a lot of resistance," Frank said.

"People are just concerned about going to that part of the world."

There have been many booking cancellations, added Micky Arison, chairman and CEO of Carnival.

The company is hopeful the nervousness will settle down and the cruises will go back to a normal booking pattern, Arison said.