Fuel hedging no guarantee for airlines 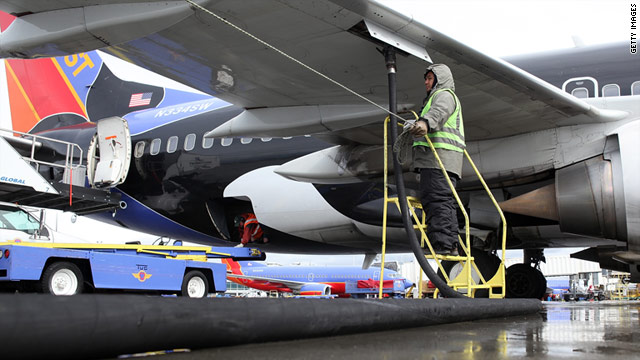 (CNN) -- Last week, I wrote about the relationship between fuel prices and airfare increases, and many of you balked, saying that fuel hedging keeps airlines from paying more for fuel. Unfortunately, it doesn't work that way. There is some protection, but no airline is completely insulated.

Let's back up a little. What is fuel hedging?

Think of it like your home insurance policy. You pay for insurance in case something bad happens. You hope you don't need it, but if you do, it's there. Fuel (or more accurately, oil) hedging is similar. Fuel prices shooting up is the "something bad" as it increases airlines' costs significantly.

Of course, oil hedging is far more complicated than just buying a home insurance policy, and there are a lot of different ways to do it.

The basic insurance-type of policy is when airlines purchase the right to buy oil at a set price at some point in the future. If the price of oil has gone up, they can use that option to buy oil at the original, lower price. If oil went down, then the option simply served as an insurance policy that never got used.

The problem here is that with the price of oil being so volatile over the past few years, the cost of simply locking in a fixed price has gone up.

Since it's more risky, the financial institutions selling the options need to be paid more to make it worth their while. That's why other types of hedging have become popular. They help lower the cost to the airlines, but they also require that the airlines take on more risk.

One of these techniques is for airlines to get into an agreement where they are protected from rising prices as shown above, but they also give up the potential benefit of oil prices going down.

Delta, for example, had this type of hedging in the first quarter of 2011 with an average range of $75 to $90 a barrel. That means that if oil stays in that range, Delta gets no benefit. But if oil goes to $100 a barrel, the airline wouldn't end up paying more than $90 a barrel. If, however, oil goes down to $65, then Delta would still have to pay $75.

Another type of bet that airlines make eliminates that range and focuses on one number.

That's exactly what happened to Southwest a few years back.

Southwest got lucky when it locked in its oil at a low price, and it had a massive cost advantage against the other airlines for some time. The problem is that those low oil prices didn't prevent Southwest from having to adjust to the new realities of higher oil. It simply delayed it until the hedges ran out.

And Southwest kept buying hedges at higher and higher prices. But when oil prices came crashing back down, Southwest owed a lot of money to the financial institutions with which it made its bets and ran into a cash crunch as a result.

The point of all this is that oil hedging itself doesn't come without risk, and it also doesn't necessarily guarantee a set oil price for the airlines. On top of that, it can be expensive.

The most conservative hedging options have a high fixed cost to buy the options. The more risky techniques might not have high fixed costs, but they come with risky downsides, as Southwest and others learned in 2008 after oil prices fell. That's why you don't see any airlines hedge all of their fuel needs.

Some airlines have decided that the high price of hedging isn't worth the money.

US Airways and Allegiant Air are two examples of airlines that don't hedge.

Last year, they were right. US Airways saw oil prices rise from $70 to $92 a barrel, but that increase in costs was still lower than what it would have had to pay to hedge in the first place. That's why the airline actually ended up with lower fuel costs last year than any of its competitors that hedged.

So even the most aggressive hedging airline still is fully exposed for a third of its fuel needs and doesn't necessarily have a fixed price for the rest. That means that when fuel prices increase, airline costs increase as well. So fare increases are bound to follow.