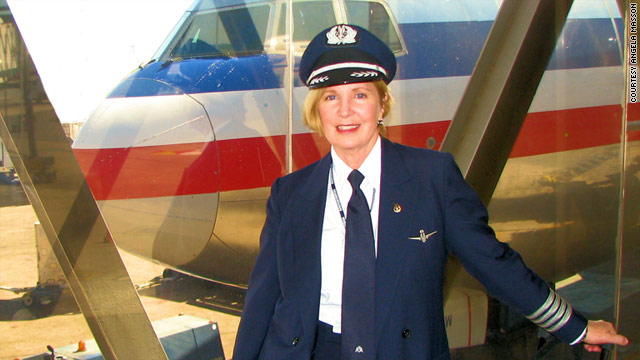 Angela Masson was a pilot for American Airlines for 31 years. Just a small fraction of airline pilots are women.
STORY HIGHLIGHTS

(CNN) -- It's a familiar ritual of flying -- that moment when you're buckled into your seat and the cabin's loudspeakers come to life with a voice that says, "Hello, this is your captain speaking. Welcome aboard."

But how many times in your travels has that voice belonged to a woman?

For most fliers, the answer is never or very few.

While there are plenty of women working in the airline industry around the world -- from gate agents and flight attendants to the corporate rank and file -- men still dominate when it comes to finding a career in the cockpit.

Why that's happening almost 80 years after Helen Richey became the first woman to pilot a commercial airliner is a complex answer that involves money, training, job realities, girls' awareness about career options, and also a bit of mystery.

"Getting more women involved in all aspects of aviation is a nut that everyone in the industry would like to crack but that no one, to date, has," said Chris Dancy, a spokesman for the Aircraft Owners and Pilots Association.

Women make up about 5% of the 53,000 members of the Air Line Pilots Association, which represents pilots at major and regional carriers in the United States and Canada.

I suppose if the job were just concerned with flying, there would be a lot more women. But the job isn't just flying.
--Angela Masson, retired captain

Only about 450 women worldwide are airline captains -- pilots in command who supervise all the other crew members on a flight, according to the International Society of Women Airline Pilots.

Angela Masson, a retired American Airlines captain who heads the group, said it shouldn't be very surprising that women don't flock to a stressful male-dominated job that requires lots of expensive and continuous training, takes them away from home for large chunks of time and makes it difficult to raise a family.

"I suppose if the job were just concerned with flying, there would be a lot more women," Masson said.

"But the job isn't just flying, it's wrapped up in a whole lot of other unappealing circumstances, unappealing especially to women who may not have the drive, ambition, financial means or the family/network support to pursue flying as a career.

"Flying has to be something that you really, really want, because even gender issues aside, it's a very challenging and demanding career."

But very few women even view it as a job option in the first place, said the female pilots interviewed for this article.

Victoria Dunbar, who teaches in the aviation program at the Florida Institute of Technology, says about 10% of the students in her classes are women. She finds that most of them have something in common: a family member who flew and showed them it was possible at an early age.

"It just seems like the women, if they didn't have it around them as a young child, then it's not something they considered," Dunbar said.

"My experience is that female pilots are excellent. It's not like there's a particular skill or knowledge that guys are better at. I think a lot of women just don't think about it ... as a career field."

Female pilots at your airline
We wanted to find out how many female pilots work at some of the major U.S. airlines, but it turned out not to be easy.

Some carriers were quick to respond with the numbers:

But other airlines contacted for this article stayed mum on the subject.

Delta, Southwest, United and US Airways did not respond to requests for information about the number of female airline pilots they employ.

When they do decide to pursue flying, one of the biggest obstacles to getting a job at a carrier is money. When going the civilian route, it can cost up to $100,000 in training to become an airline pilot, said Amy Laboda, a pilot and editor in chief of Aviation for Women magazine.

An aspiring aviator can skip the big costs by learning how to fly in the military, and many pilots who take this route traditionally go on to work for commercial airlines. But there are still few female pilots in military ranks.

Women make up less than 5% of the more than 14,000 pilots currently in the U.S. Air Force, for example, according to the Air Force Personnel Center.

One reason is that some women simply don't find the military route appealing.

Jill Schilmoeller had wanted to be a pilot since she was 8 years old, but she wasn't interested in joining the military, so she got a college degree in aeronautical studies and then worked as a flight instructor for two years to build up flight hours and experience.

Like many pilots, she began her airline career with a regional carrier, where the starting salary can be less than $20,000 a year for a first officer, according to FltOps.com, a pilot career information service.

"You have to love flying, because you start off getting paid horribly and you are gone a lot, and I don't know if that's desirable to a lot of women," said Schilmoeller, 35.

Her parents helped put her through flight school, while a scholarship from the International Society of Women Airline Pilots also defrayed some of the costs.

Schilmoeller's goal was to fly for a major airline, but when she had enough experience to apply for a job at a legacy carrier in 2003, there weren't any openings. So she went to work as a pilot for FedEx instead.

Such airline hiring dry spells are another reason you may see few women in the cockpit.

The industry slumped after the September 11, 2001, terrorist attacks, and then again during the recent economic crisis. Many airlines have been furloughing pilots, rather than hiring them. So women coming up through the ranks, like Schilmoeller, have faced tough job prospects and stiff competition in a profession where seniority is everything.

The men who didn't want women in the cockpit have mostly retired.
--Amy Laboda, editor in chief, Aviation for Women magazine

On a more positive note, the women who do fly these days said that they didn't have a sense of anyone in the industry being unwelcoming or holding them back.

"I can tell you that [female airline pilots] have made tremendous progress, and the reason ... is because most of the dinosaurs are gone," Laboda said. "The men who didn't want women in the cockpit have mostly retired."

Masson, who was hired by American Airlines in 1976 and flew for the carrier for 31 years, said she worked with a couple of male captains who made it clear they weren't thrilled to be flying with her. But she never had a problem when she herself became a captain, she said.

Passengers also reacted warmly when they realized their pilot was a woman, offering a lot of "hearty handshakes" and compliments, Masson, 60, said. But there was one memorable exception.

Want to be a pilot?
These organizations offer help and support for female aviators:

"One time, way back, I had a gentleman come up and say 'I have a fear of flying, and my psychiatrist said to me if there's anything you don't like, just don't go on that trip and take the next one.' And he said, 'Frankly, I'm insecure with a woman pilot.' So I said fine," Masson recalled.

Schilmoeller remembers getting some double takes from passengers when she flew for a regional carrier in the early 2000s, but said most of her male colleagues weren't at all surprised to be working alongside a woman.

Dunbar also said she never had the feeling that male pilots wanted to keep their female counterparts out of the cockpit.

Meanwhile, women who did choose flying as a career said they couldn't image doing anything else.

"An airline pilot has a first-class-seat, window-with-a-view chance to see the world. An airline pilot gets to maneuver the throttles of a fast, faster, fastest machine, zoom down runways with only the future in the way, lift into the sky to play with the clouds, watch heaven's light dance, count the stars in the blackest nights," Masson said.

Whether the number of women who get to experience the same thrills will rise anytime soon remains to be seen.