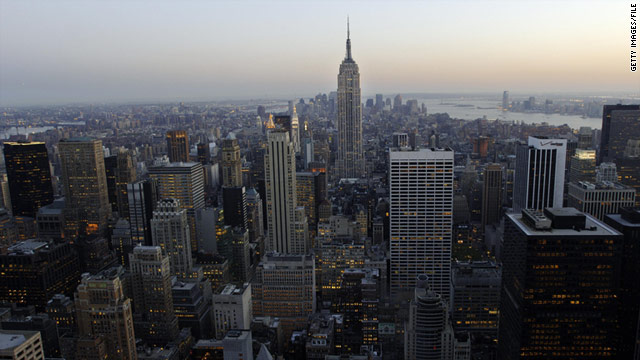 New York (CNN) -- New York City and I broke up almost 10 years ago. I said it was my fault, but I lied. Money drove us apart. The city was happy to take, but unwilling to give. At least to me. Finally, I left. But I wasn't happy about it.

A few years later I read an article about a guy who jumped off the Golden Gate Bridge and survived. This is how he described what happened as soon as he leaped,"I instantly realized that everything in my life that I'd thought was unfixable was fixable...except for having jumped."

That's how I felt looking at the city framed in the rearview of my cousin's pickup the day he helped me move. NYC and I could have worked something out. But it was too late. I was off to another town. The city kept the cat.

So, when I recently returned to New York, courtesy of a TV show, I was especially giddy. OK, I wasn't financing the trip myself, and, yes, I was staying in the storage room of my friend's apartment in the West Village. But New York didn't know that.

Here's what New York saw when I landed: A guy in a suit holding a card with my name on it. Now this is not a common occurrence for me, it was just a fringe benefit of the aforementioned TV appearance. For a moment I pretended that I was waiting for my luggage so the city could take it all in and see how far I'd come. Kind of a "How ya like me now?" moment directed at my ex.

But NYC's too cool to care. And if I'm honest with myself, that's why I love it. After a few minutes I admitted to the driver that I didn't have any checked luggage. Unsmiling, he stared at me for a moment and then turned and started walking to the car.

And then there she was. Is there another city in the world where a glimpse of it makes you feel like you're hang gliding while sipping a martini?

And that's the paradox at the heart of visiting New York. The most expensive city in the United States provides the cheapest thrill: You just need to arrive and look up.

Of course you also have to eat, but that can be done on the cheap, too. Yes, NYC is rightfully famous for its upscale restaurants (Ai Fiori and Recette are two buzzy new comers), but it also has a host of handsome, not-insanely priced options like Momofuku and ABC Kitchen. And it's home to my favorite eatery: The closest bodega.

Bodegas are mini grocery stores. The name comes from the Spanish word for grocery store. Many of NYC's bodegas were opened by Puerto Rican and Dominican immigrants, but they are now owned and operated by a rainbow of ethnicities. In Lower Manhattan, they're never more than a block or two away.

They are chock full of soda, water, beer, newspapers, fake aphrodisiacs, cigarettes, chapstick and all the other sundries you might need during your long days away from your usually small living quarters. But more importantly, bodegas are beacons of hope in the tumult of the big city. They are first-aid stations, reality checks, enablers, canteens, information booths, shelters and -- this is my favorite part -- makers of affordable sandwiches.

The Canadians can have their government health insurance, I'll take the security of two gooey eggs, salt, pepper and a slice of cheese on a kaiser bun for under four bucks. Or a thick turkey sandwich with cold lettuce, tomatoes and mayo to mop up what I spilled down my gullet at a bar on a long night.

As it turns out, high rents and the proliferation of chain stores are pushing bodegas toward extinction. You know how people say that New York has turned into a playground for the rich? They're right. Just window shopping on Hudson Street can lower your FICO score. Average rent for a two bedroom apartment in Manhattan is north of $3500. Throw in a doorman and you're talking another two grand. That means two months rent will pay for a year of public college where you can take a course in psychiatry and earn a living examining the heads of people who live in Manhattan.

But, if one can secure affordable digs for a visit (my friend's storage closet is constantly filled with visitors from out of town. God knows where he keeps his luggage. Oh that's right, he probably can't afford to leave), the concentrated wealth of Manhattan provides more than just thoughts of revolution.

It has created wondrous architecture and soul nourishing public spaces like the newish High Line, a 1930s elevated railway that's being turned into a park on Manhattan's West Side. The High Line is a miracle of art, native grasses and city views. It's for walking. And sitting (there are lounges with wheels that slide on the remnants of train tracks.) It's elegant.

I wonder if NYC will take me back. I'm in love again. Now I just need to find an affordable apartment.

EAT
The Spotted Pig Puts the "gastro" in gastropub. Michelin-star food in an unassuming setting. The restaurant's famous friends give it a hint of glamour. Can the rest of America copy this idea already? (I'm looking at you Los Angeles.)
Cafe Angelique Sunny, yummy and bustling. A little French cafe where you can fill your stomach and your Moleskine notebook.
Momofuku If you've never had real ramen, don't go here; it will ruin you forever. Otherwise, stop by for some of the best in the country.
Little Branch Sasha Petraske's (the man who helped spark the cocktail renaissance and the getting stale faux-speakeasy phenom) most democratic bar. Perfect, and I mean perfect, cocktails complete with dim light and occasional jazz.
Prune Butchers gave away bone marrow for free when chef Gabrielle Hamilton started selling it at this influential little bistro 20 years ago. Since then, marrow, and Prune copycats, have started showing up everywhere. This OG of Euro-peasant fare still has a certain sparkle that sets it apart.
Cherry Tavern This dive bar will do. Smells like industrial cleaner and sounds like Interpol. Killing time here is not only legal, it's encouraged. 441 East 6th Street

STAY
A friend's house. Or find a place on Craigslist.org where people make their apartments available for short stays.