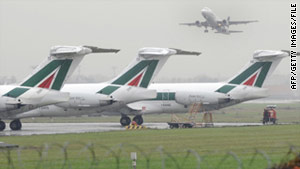 Tune in to "AC360º" tonight at 10 ET as Anderson Cooper, Dr. Sanjay Gupta and Soledad O'Brien report live from Japan on the quake and tsunami's catastrophic effects.

German airline Lufthansa and Italian carrier Alitalia have rerouted flights to and from the Tokyo area to other Japanese airports.

Lufthansa's flights to and from Frankfurt and Munich are going to Osaka and Nagoya instead of Tokyo/Narita "in an effort to ensure that [the airline's] operations to Japan remain as stable as possible and provide sufficient capacity for its passengers," Lufthansa said in a statement.

The altered schedule is expected to last as least through the weekend. Since Sunday, the airline has been scanning aircraft returning from Japan for radiation.

"To date, none of the tests has detected any radioactivity," the statement said.

Alitalia started rerouting all of its flights in and out of Tokyo airports to Osaka on Wednesday. Spokesman Clemente Senni said the change is designed to guarantee uninterrupted service to its passengers. Travelers will receive a refund for the trip between Tokyo and Osaka, Senni said.

"We are obviously testing planes for radiation, but nothing has been registered so far," he said.

British Airways is routing its Tokyo flights through Hong Kong for a brief stopover, and its flights bound for Tokyo's Haneda Airport will now land in Narita instead.

Tokyo is more than 150 miles from the damaged nuclear power plant in Fukushima.

U.S. airlines are in close contact with the Federal Aviation Administration and other agencies and regulators in the U.S. and abroad, monitoring conditions around the nuclear facility, according to the FAA.

American Airlines is operating its normal schedules in and out of Tokyo's airports, according to spokesman Tim Smith. The majority of customers have traveled as scheduled, he said.

"At this point, we're monitoring things very closely and have not made any immediate decisions to change," Smith said.

Delta and Continental airlines did not respond to requests for comment Wednesday afternoon.

Japanese aviation authorities have imposed a no-fly zone within 30 kilometers (about 19 miles) of the Fukushima Daiichi plant. The FAA is alerting pilots to that restriction, spokeswoman Laura Brown said.

On Wednesday, the U.S. Nuclear Regulatory Commission advised U.S. residents within 50 miles of the Fukushima reactors to evacuate. The commission's statement did not reference airspace.

Representatives from the Allied Pilots Association, the union that represents American Airlines pilots, said its members, flight attendant union members and others are working closely with American Airlines management to make contingency plans should the situation at the reactors deteriorate.

The real concern, he said, will come if the situation worsens.

First Officer Scott Shankland, a national union representative, said he believes the airline is in a good position to react to new developments.

On Wednesday afternoon, U.S. Customs and Border Protection said it was monitoring the situation in Japan carefully.

"Out of an abundance of caution, CBP has issued field guidance reiterating its operational protocols and directing field personnel to specifically monitor maritime and air traffic from Japan," the agency said in a statement.

"No aircraft entering the United States today tested positive for radiation at harmful levels," it said.