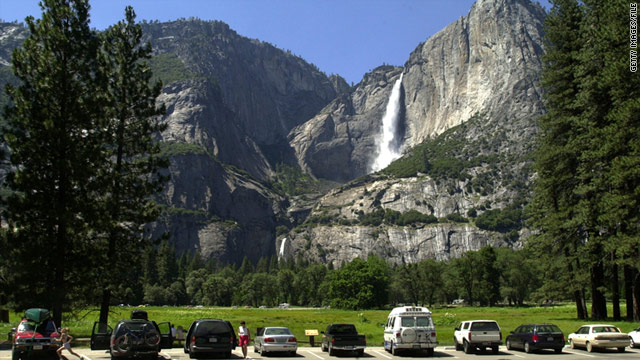 Soaring gas prices may cut into summer road trips to destinations such as Yosemite National Park in California.
STORY HIGHLIGHTS

Santos-Palmer, her husband and two young children were planning to drive from their Santa Cruz, California, home to New York over six weeks this summer.

"If the gas prices stay the same or continue to go up, we're not going to do it," Santos-Palmer said.

They were planning to stay in hotels and with family and friends along the way.

"But now, there's no way we're going to stay in hotels. If the gas prices continue to be like this, we're just going to have to find places to stay with people or not do the trip at all."

Gas prices could take a bite out of the travel market if other American families pull back on spring and summer road trips.

Santos-Palmer's family celebrated her 28th birthday over the weekend at Yosemite, a five-hour drive from home. Gas near the park, where supply is scarce, was running close to $4.50 per regular gallon, she said. On average, Californians were paying $3.92 a gallon Wednesday, 40 cents above the national average of $3.52, according to AAA's daily report.

Where are gas prices heading?

But if fuel prices stay high and continue to rise, he said he expects business to drop a bit as people tailor their plans to suit their budgets.

"If they normally would take a long trip, they go closer in," he said.

Staying closer to home is exactly what some travelers did during the summer of 2008 when fuel prices reached record highs, said AAA national spokesman Troy Green. Still, Americans have a strong desire to travel, and those who book months in advance are likely to go, possibly cutting back on spending for lodging, dining or incidentals, Green said.

AAA won't issue a travel forecast until a few weeks before Memorial Day. In the summer of 2008, the automobile club forecasted a slight decrease in travel for Memorial Day, July Fourth and Labor Day due to economic woes and gas prices hovering around $4 a gallon that July.

For now, Rietveld and other industry professionals are feeling good about spring break.

Panama City Beach, Florida, is looking at a strong spring in the wake of the devastating oil spill last year. The oil disaster doesn't seem to be affecting spring break travel at all, said Dan Rowe, president of Panama City Beach's visitors bureau.

The popular Gulf Coast destination sees the arrival of hundreds of thousands of students as an opportunity to show the world that the oil is gone, he said.

Rowe said he's hoping that gas prices don't dampen the appetite for summer travel. The incremental increase per gallon for gas isn't likely to add that much to the overall cost of a trip from most of the destination's top markets in neighboring states, but lodging providers will be ready with incentives to ease travelers' concerns if prices stay high into the summer, Rowe said.

In 2008, many local lodging companies offered gas gift cards and other added values.

"Anything we can do to make it easier for people to say, 'Yes, I want to come to the beach,' " Rowe said.

"We have not yet seen our attendance affected by rising gas prices," he said.

A Disney World spokesman declined to comment on how the rising price of fuel might affect that park, but at least one Californian is putting off a trip to sister park Disneyland.

Santos-Palmer said she wanted to take her son to the amusement park in Anaheim, California, for the first time in April to celebrate his fifth birthday, but she "just can't do it."

"It would be more on gas for the two of us than for both of our tickets combined," she said.