The scoop on business class seats 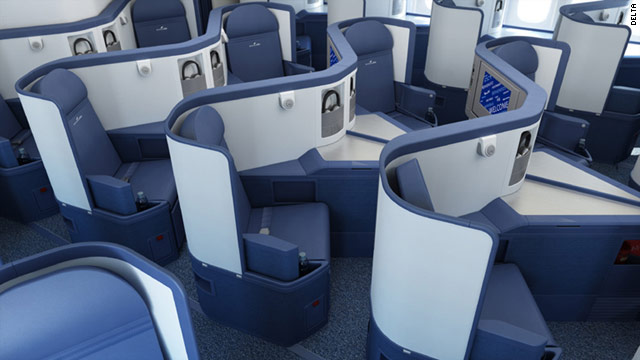 Delta's flat bed seats are a treat for travelers who like to sleep on long flights.
STORY HIGHLIGHTS

(CNN) -- Do you talk to your neighbor a lot when you fly? Would you rather bury your head in a book? Or just pass out until you arrive? Your travel style should influence your choice of the airline you fly, especially if you're one of the lucky few to sit in a premium cabin.

If you're in coach, well, a seat is pretty much just a seat. Sure, legroom can vary and the few remaining amenities can too, but the seat itself is nearly always that same seat you've come to know and hate.

But if you're flying in business class, every airline has a different type of seat. Some face forward while others face back. Some have total privacy while others, well, not so much. Some seats are better than others for different kinds of travelers. Which should you choose?

This is my least favorite type of passenger because I'm insanely jealous. I can't sleep on airplanes without heavy drugging, but for those who can, make sure you fly on an airline with flat beds up front. And I'm not talking about those fake "lie flat" beds. Those are the ones that are technically flat, but the entire bed is at an angle pointing down. If you've ever woken up with a nasty wedgie on an airplane, you've probably experienced this seat.

American has those "lie flat" seats throughout its international fleet, as do Air France and KLM. Delta, however, is going fully flat as is the new United, but they're in the middle of the transition. Even US Airways is heading in that direction. Internationally, it's a mixed bag. Airlines such as British Airways and Singapore have led the way in providing flat beds, but others, like Lufthansa and Japan Air Lines, have held out with the "lie flat" option. 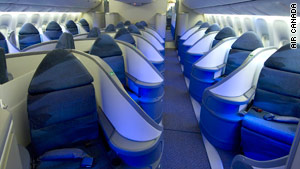 Air Canada's herringbone seats are private and great for sleeping, but a challenge for chatting.

If you're traveling with someone, there's a good chance you'll want to talk to that person. So which seats do you avoid? The herringbone seats are the worst for traveling with a partner. This layout was first installed by Virgin Atlantic.

Basically, if you look at the cabin from above, it looks like a rib cage, with the seats arranged stretching across the cabin from the window instead of along the length of the plane. Since the seats are staggered and the barriers are high, it makes it really hard to see who's next to you.

These seats are very private and great for sleeping, but they make talking to a neighbor difficult. I tried that with my wife once and ended up with a very sore neck. Besides Virgin Atlantic, you'll find these on Delta's 777 airplanes. Air Canada and Air New Zealand also use this layout. US Airways has started using a reverse herringbone (which Delta will also put on its 747s), where your seat starts at the aisle and points toward the window.

Often, people will just want to sit back and relax on a flight. Maybe watch a movie, read a book, or peruse the safety card one more time . . . just in case. 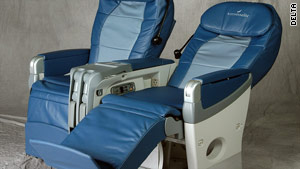 Delta's cradle-style seats are being replaced by the latest upgrades.

Sadly, these types of seats are disappearing from fleets fairly quickly. The recliner, or cradle-style seat is the perfect one for lounging. It's just not great for sleeping, so you're only likely to find them on airlines that aren't willing to pay for the latest upgrades.

For now, you can still find them on many of Delta's 767s as well as United's 777s. They won't be around for long, so enjoy them now if you're like me and can't sleep.

If you have trouble with motion sickness, you might want to think about which way your seat is facing. I'm not sure about the science behind this, but since people usually expect to feel airplanes moving forward, a rear-facing seat can be disorienting.

British Airways has flat beds that alternate. So the window seat faces back, then the aisle next to it faces front. United does it a little differently, with direction alternating by row. Having flown backward before, I can say that it's a unique feeling that I liked, but I know others who just aren't comfortable with it. No airline has all backwards-facing seats, but on flights that have them, you'll just need to be careful about which seats you pick.

In the end, it's a nice problem to have. No matter what airline you fly, you can give thanks for the fact that you're not sardined in coach.