A microscopic look at hotel hygiene 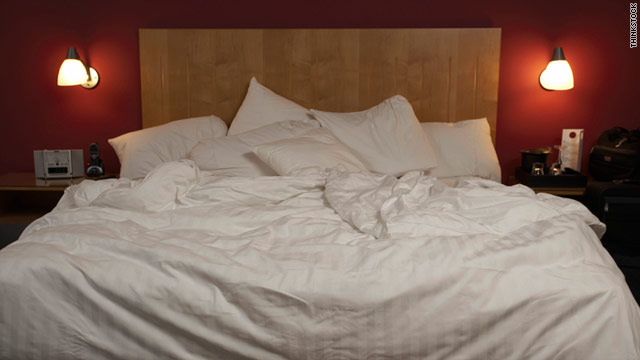 The potential for hidden germs in hotel rooms gives some travelers the heebie-jeebies.
STORY HIGHLIGHTS

(CNN) -- Philip Tierno doesn't feel comfortable staying in hotels. He knows too much.

The microbiologist travels with an impervious mattress and pillow cover to protect against the unseen debris that guests leave behind in what he compares to the lost Roman civilization, particles "literally buried over time" in the bed.

"What I'm saying is it's not just you in bed, it's who comes after you," said Tierno, director of microbiology and immunology at New York University's Langone Medical Center.

More disturbingly, it's who comes before you, too.

When it comes to hotel bedding, allergens are the biggest problem for guests, Tierno said. Evidence of bedbugs is an immediate dealbreaker for Tierno, but we'll leave them out of the picture here since that problem is closely related to the presence of guests, not germs.

You can probably imagine what might be lurking in the mattress, but here's a sampling for those who hesitated: skin cells (when humans sleep they shed about 1.5 million cells or cell clusters an hour), human hair, bodily secretions, fungi, bacteria, dust, dust mites, lint, insect parts, pollen, cosmetics ... and more.

Hygiene tips for hotel guests
Guests worried about germs and allergens can do the following to protect themselves:

Some of the newer hotels use the type of impervious, waterproof covers Tierno carries with him, but most don't, he said. While the covers were developed for allergy sufferers, Tierno encourages everyone to use them at home and on the road. Ask when you reserve if the hotel uses allergy barriers on beds.

Hotel bedspreads became a hot topic when one featuring bodily fluids from several sources was introduced in boxer Mike Tyson's 1992 rape trial. The American Hotel & Lodging Association got so many queries at the time that it came out with a statement saying the Centers for Disease Control and Prevention "has NEVER identified, seen, or classified ANY significant disease outbreak in hotel or motel rooms as a result of hotel bedspreads and blankets."

While many hotels have followed in the footsteps of Westin Hotels and Resorts, adopting a duvet model of bedding mimicking the brand's Heavenly Bed, plenty of chains on the lower end still use quilted bedspreads.

And Tierno is far from the only traveler to toss them aside.

CNN.com readers shared their distaste for bedspreads in the comments section of a recent story about TripAdvisor's list of America's dirtiest hotels.

"The first thing I do when I stay at a hotel is remove the comforter and store it in the closet. I would rather be cold than sleep under a piece of linen that rarely, if EVER, gets washed. Freaking gross," wrote one CNN.com reader.

It's certainly true that bedspreads, or the quilts inside duvet covers, don't get thrown in with the sheets for a daily wash.

Hotels schedule periodic deep cleanings for rooms when tasks might include pulling furniture away from walls to clean, flipping mattresses, cleaning vents, shampooing carpet, changing mattress pads and replacing blankets and bedspreads, according to Reneta McCarthy, a lecturer at Cornell University's School of Hotel Administration.

"If you went through and you had a good system in place and you were trying to deep clean each of your rooms four times a year, is it possible that a bedspread might only be changed four times a year? Yeah, it is," said McCarthy, who started out in the industry as a housekeeping manager for a major American chain.

In some cases, the cover that protects a duvet may not be changed from one guest to another if the bed has a top and bottom sheet, McCarthy said.

Big chains have brand standards and very specific cleaning protocol, according to Howard Adler, director of the Center for the Study of Lodging Operations at Purdue University.

"It's an ongoing battle to keep training at a high level to maintain your high standards of cleanliness, of hygiene and all those things," Adler said.

CNN's calls to four large hotel companies about brand standards and hotel hygiene were not returned as of press time.

In hotel rooms that aren't properly disinfected, some of the germiest areas tend to be the faucet and sink areas, the flusher of the toilet, the underside of the toilet seat and the shower floor, Tierno said.

Tierno has conducted a number of scientific hotel room studies over the years and is the author of "The Secret Life of Germs." Improper cleaning techniques, such as using the same rag in the bathroom and on the remote control, can spread germs around. Cleaning in a "cavalier manner" doesn't happen only in lower-end hotels, he said.

Germs also tend to congregate in places touched multiple times by multiple people that may not be cleaned thoroughly, if at all -- the interior doorknob, the telephone, the remote control and the alarm clock.

While he acknowledges, "There's no raging problem of communicable diseases contracted in hotels," cold, flu and gastrointestinal viruses can be spread on surfaces.

"When you have people, unfortunately you have transmission of germs," Tierno said.

In Atlanta, a local television station used hidden cameras several years ago to monitor how the drinking glasses in hotel rooms were cleaned. In one case, a housekeeper appeared to clean a toilet and the glasses wearing the same gloves. In multiple hotels, the glasses were rinsed in the sink and dried for the next guests, in violation of health codes.

There are codes in addition to those for food and beverage service that apply to hotels. The rules and how they're enforced vary state to state and inspections sometimes are conducted on the county level.

In North Carolina, hotels are inspected once a year. Restaurants, including those in hotels, are inspected as many as four times a year, according to Bart Campbell, chief of the Environmental Health Services department.

McCarthy recalls one inspection during her decade of working in hotels. That inspection was in North Carolina, where one of the state standards requires top sheets to be folded over blankets by at least six inches.

At most major hotels, managers do a checklist inspection of rooms after each cleaning, Adler said, but there's no 100 percent reliable method of making sure staffers don't cut corners.

Still, exposure to germs in hotel rooms is generally nothing some timely and thorough hand washing can't fix, Tierno said.

Of the 60,000 types of germs people might encounter over the course of their lives, only 1% or 2% are capable of causing disease, he said.

So while Tierno's not comfortable staying in hotels, he's not afraid either.

"I know where potential germs lie within the hotel room and I know what to do to prevent myself from becoming ill."