10 islands to see before you die 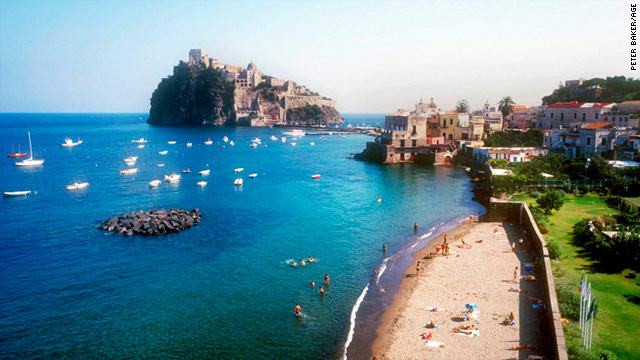 Ischia, a volcanic island located in the Bay of Naples, is known for its therapeutic hot springs.
STORY HIGHLIGHTS
RELATED TOPICS

(BudgetTravel.com) -- If you're going to imagine yourself on an exotic island, dare to dream big! Here are 10 one-of-a-kind islands where you'll discover every item on your wish list, from overwater bungalows and pristine wildlife to sublime street food and mysterious cultural monuments.

Of course, traveling to these islands comes at a price; the dollar signs below provide a general indication of how much you'll want to budget for accommodations and food. Multiply by seven if you stay a week or by 365 if you're convinced to quit your job and stay a year.

When the U.S. Navy packed up and left Vieques in 2003 after more than 60 years, it left something behind: unspoiled nature. Land once used for bombing practice is now designated as a national wildlife refuge.

So far there are only a few mega-resorts like those found on the Puerto Rican mainland -- instead, you'll find homey inns like the aptly named Great Escape B&B, where breakfast is served poolside (from $115). There are only two notable towns (the population is less than 10,000): Isabel Segunda on the northern side of the island, and the far smaller Esperanza on the south. The effect is that when you reach a beach at the end of a dirt road here, your reward is having the sand largely to yourself.

Playa de la Chiva (Blue Beach) attracts daytime snorkelers and divers, but the real reason Vieques belongs on your bucket list is Puerto Mosquito. Of the seven bioluminescent bays on the planet, Puerto Mosquito is the most impressive, thanks to the clarity and brightness of its waters. Schedule a moonless night for a swim or kayak tour and you'll be greeted by billions of micro-organisms called dinoflagellates that ignite the water with a magical blue-green glow (Aqua Frenzy Kayaks, from $30 per person). It's like swimming in a watercolor painting. $$

EASTER ISLAND: Ponder the handiwork of one of the most mysterious civilizations in history

With the nearest major landmass, Chile, lying 2,200 miles away, Easter Island is as remote as it is mysterious. No one knows exactly why nearly 900 gargantuan stone monoliths are sprinkled across this isolated, 60-square-mile scrap of land in the middle of the South Pacific -- and those long, stone faces aren't talking.

For several hundred years, the moai that are unique to this island have maintained their silent sentinel even as the civilization that created them collapsed and a trickle of tourists appeared in its wake. Intended to stand atop cut-stone altars (called ahu), the moai average 13 feet high and weigh nearly 14 tons each; most lie prone, toppled by civil wars in the 17th and 18th centuries. A particularly compelling spot is Rano Raraku, the collapsed volcano where many moai were quarried and where nearly 400 figures remain, all frozen in various states of completion.

The island counts only one town, Hanga Roa, where you'll want to check in to Vai Moana, a low-key hotel with 18 rooms set in bungalows (from $102, including breakfast and transport to and from the airport). You can then wander from the volcanic coastline across grassy hills without bumping into another human being who might break Easter Island's spell. $$$

BALI: Find your center on an island so spiritual it's become known as "Island of the Gods"

The warm, spiritual essence that writer Elizabeth Gilbert discovered here and celebrated in "Eat, Pray, Love" has been native to Bali for centuries. It's one of 17,000 islands in the Indonesian archipelago -- and the only one on which Hindus form the majority (93 percent).

Even more striking is the fact that there is a spiritual celebration here nearly every day. Three Hindu temples at the Besakih (the Mother Temple of Bali) survived a 1963 eruption that destroyed nearby villages while missing by mere yards this terraced complex atop volcanic Mount Agung. The event is still considered a miracle by locals, who arrive in regular procession; they balance offerings on their head and climb the steps to the sound of mantras, jingling bells, and the sharp flutter of umbul-umbuls (ceremonial Balinese flags).

Anyone interested in exploring the inner self might like the Nirarta Centre, an 11-room hotel set amid rice terraces and gardens that holds daily meditation sessions. After finding your center here, channel your energy into jungle treks, scuba diving, and big-break surfing along beaches of fine white and volcanic black sand. Exhale against a backdrop of rice paddies and Impressionist sunsets that illuminate the Indian Ocean. $$$$

This volcanic island in the Bay of Naples has hot springs so therapeutic that they have drawn admirers for 2,000 years. Greeks, Romans, and Turks quickly discovered that Ischia's fumaroles, hot springs, and heated mud hold the power to ease sore muscles -- or simply provide a degree of self-indulgence. Today's travelers are likewise pampered by massages and mud wraps courtesy of the island's geothermal characteristic, which helps fill the 22 thermo-mineral pools of the beachfront spa Giardini di Poseidon Terme.

After your treatment of choice, peel off the sandals for a walk on the beach, a visit to the 15th-century Castello Aragonese, or a glass of biancolella (white) or per 'e palummo (red) wine from local vineyards. You can also get a taste of the glam, jet-setter lifestyle associated with Italy and depicted in the film "The Talented Mr. Ripley," shot here on location.

Retreat to the family-run Hotel Villa Angelica, whose garden naturally includes a thermal swimming pool with a Jacuzzi (from $75, including breakfast). $$$

CHILOÉ: Experience a culture and wildlife developed in isolation

The lush, cloud-covered Chiloé archipelago may lie off the western coast of Chile, but its history, customs, and language bear little resemblance to those of the mainland, or anywhere else in the world, because of its isolation.

Local farmers have passed down a mythology of gnome- and witch-filled woodlands and ghost ships. Valdivian temperate rain forests are protected within Parque Nacional Chiloé. In the Pacific, dolphins, penguins, otters, and the largest creatures in history -- blue whales -- are studied and protected by the Cetacean Conservation Center.

In the central city of Castro, order a steaming meal of curanto (shellfish, meat, and potatoes) and peruse handicrafts made of wood and colorful garments created from Chilean wool. Residents still live in traditional palafitos (stilt houses). Jesuit missionaries, who first arrived in small numbers in the 1600s, used local materials and construction techniques to build exquisite chapels. Their work survives in more than 50 wooden churches found in communities such as Castro, Nercón, Chonchi, Dalcahue, and Quinchao; their appearance reflects a hybrid of European and indigenous styles that you won't find anywhere else on earth. $$

BORA BORA: Settle into your own overwater bungalow on the world's most famous idyllic island

If you envision yourself on an island in French Polynesia, Bora Bora is the place to hang your hammock. Even novelist James Michener, who penned sweeping epics set in the South Pacific and beyond, dubbed it the world's most beautiful island.

Mingled in among the Society Islands northwest of Tahiti, Bora Bora's lowland reefs and islets are lorded over by Mount Pahia and Mount Otemanu, twin peaks forming an extinct volcano in the island's interior. Super-expensive upscale resorts along the western edge -- and a fair share of inns and vacation rentals -- feature overwater thatch-roofed bungalows built on stilts above shallow, clear-as-gin waters. (Maitai Resort is a comparatively affordable option, considering the $800-plus competition, with rooms from $198 and bungalows from $408, including taxes.)

Slip on a sarong and relax while savoring the vision of endless miles of soft sand beaches and lagoons. Luxurious, certainly, but of even greater value is the philosophy of Bora Bora's residents: Aita pea pea. In other words, "not to worry." $$$$

Defying easy categorization, Key West is capital of the Conch Republic, the tongue-in-cheek micro-nation created in 1982 by residents proud of their liberal lifestyle. Natural sand beaches are surprisingly rare here, but with the chance to snorkel above North America's only living coral reef and enjoy the company of a Technicolor collection of 400 species of tropical fish, it would be a shame to spend your beach time on land, anyway.

When you've dried off, head to Mallory Square to catch street performers during the daily Sunset Celebration. Follow it up with brews along the "Duval Crawl," a tour of watering holes in the early 20th-century buildings that line Duval Street. From there, it's a pleasant, 15-minute walk to the Grand Guesthouse (from $98, including breakfast). $$$

PENANG: Treat yourself to Malaysia's unique fusion of cultures and flavors

Start your food crawl at stalls that crowd the streets of Georgetown, Penang's largest city and Malaysia's food capital. The delectable fare on offer memorably mingles Malaysian, Chinese, Indian and European flavors. Foodies in search of supreme bliss should head to the marketplace Ayer Itam -- adjacent to Kek Lok Si (the Temple of Supreme Bliss) -- to dine on a variety of dishes based on rice, noodles, fish, shellfish, chicken, pork, vegetables, eggs, and coconut. Look for lor bak (deep-fried marinated minced pork served with a chili sauce); lok-lok (skewered seafood, meats, and vegetables); and ikan bakar (grilled or barbecued fish marinated in spices and coconut milk, wrapped inside banana leaves, and grilled over hot coals).

The same fusion of cultures is evident in the local architecture, which ranges from modern high-rises to buildings built by 19th-century British colonialists. Add to the mix beach resorts, preserved mangroves, small fishing villages, and a share of temples, mosques, and churches.

Kek Lok Si best exemplifies this coexistence. At seven stories, it's the largest Buddhist temple in Southeast Asia, and it reflects the shared values of Mahayana and Theravada Buddhism -- designed with a Chinese octagonal base, a Thai-accented middle tier, and a Burmese-style peak. $$

BudgetTravel.com: Top 10 beaches from the movies

GALÁPAGOS ISLANDS: Follow in the (r)evolutionary wake of Charles Darwin

The namesake tortoise is only one reason to explore this archipelago overrun with more than 500 spectacular native species found nowhere else. Charles Darwin's 1835 visit sparked his curiosity, leading to his landmark book and the observation that these islands are the "laboratory of evolution." Much of the biological kaleidoscope noted by Darwin -- such as penguins, sea lions, finches, blue-footed boobies -- is still visible on the Galápagos, which are scattered more than 600 miles west of Ecuador. Look out for the waved albatross, which has a 7- to 8-foot wingspan, on Española.

Tour operators navigate the islands on everything from luxury catamarans to motor yachts, and many employ naturalists to guide you through the archipelago's rocky coasts, lagoons, coral reefs, bays and white sand beaches.

Gap Adventures offers small-group itineraries that often include meals, airfare from Quito, and a cabin aboard a 16-passenger ship. Life on the island is only half the equation, so pack your mask, snorkel, and wet suit. $$$$

Nature creates and removes islands every day, but it took a supernatural influx of cash and credit to create what developers hope will be the permanent Palm Island archipelago. Based on a sketch by a sheikh, the world's largest man-made islands are being dredged up and put in place as destination resorts: the Palm Jumeirah, Palm Jebel Ali, and Palm Deira. Each work-in-progress is designed to attract tourists, who (more than fossil fuels) can provide a renewable source of income.

If all goes well, the three islands will be the focal point of Dubai and become a Middle East playground of spas, resorts, upscale residences, villas, and superior shopping malls.

Palm Jumeriah is already in place with an Atlantis resort and its wild water park open and a Trump hotel slated to open in 2011. (A more concrete, if off-island option, is the Arabian Courtyard, whose rooms have hardwood floors and richly colored upholstery, with prices as low as $100 a night.) Some islands might be more exotic -- and certainly less expensive -- but none are more impossibly engineered and ambitious. $$$$