Is the 'ugly American' label fading? 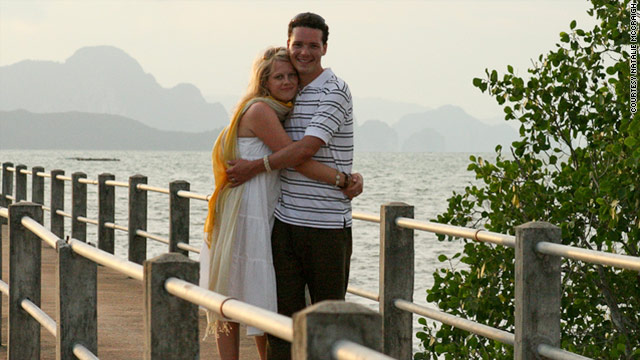 Natalie and David McCraigh relax in Thailand. For a while, they kept quiet about being American while traveling.
STORY HIGHLIGHTS

(CNN) -- Each year, Natalie McCraigh and her husband grab their passports and escape for a three-week adventure somewhere far away from their Salt Lake City home.

They've been to Thailand, Taiwan, New Zealand and Guatemala. Next month, they're off to Cambodia.

The McCraighs love exploring new cultures and meeting the locals, but at one point during their travels, they were keeping a secret.

"When we first started traveling, closer to 2001, we were a bit nervous to reveal that we were American. We were more willing to say that we were Canadian until we warmed up to people," McCraigh said. The couple was concerned by growing anti-American sentiment at the time, she explained.

When they did reveal their nationality, they would often be told they couldn't possibly be American, said McCraigh, a 33-year-old telecom service executive.

"How come you are skinny?" the locals would ask, expecting plumper U.S. tourists. "How come you don't shout?"

It's not always easy being an American abroad.

Over the years, many U.S. travelers have worried about what kind of welcome they might receive when they leave home -- whether because U.S. culture and foreign policy are disliked in some parts of the world or because of the stereotype that brands U.S. visitors as loud, demanding, too casually dressed and unversed in local culture.

Valid or not, the "ugly American" label has stuck in many countries where U.S. tourists flock.

But things may be changing.

"I do think the 'ugly American' is really dead," said Gregory Rodriguez, executive director of the Center for Social Cohesion at Arizona State University.

Rodriguez recently spent three weeks in Europe and was struck by how unexceptional the American has become there -- in a good way.

There are plenty of travelers from other parts of the world, so U.S. visitors blend in with the many other groups of sightseers, Rodriguez said. He also sensed a self-consciousness among Americans not to come across as the "ugly American."

Rodriguez wrote about his experience in a commentary last month for the Los Angeles Times titled, "From ugly to just plain American," in which he argues that a more diverse U.S. population, the weak dollar and the emergence of other global powers have all contributed to the demise of the "ugly" stereotype.

"Americans negotiate ethnic, racial and cultural and religious differences on a daily basis more than just about anyone you can think of ... therefore we're pretty adept at doing it when we travel," Rodriguez said.

He also noted a willingness to try something new.

U.S. visitors have sometimes been criticized for expecting things to be exactly as they are at home and getting upset if they couldn't find an air-conditioned hotel room or ice in their soft drink or someone who speaks English.

But an American expat living in Spain told Rodriguez that U.S. tourists these days aren't seeking the familiar. Instead, they want "something other than America."

From indifferent to friendly

David Cohen is one of those travelers, but it was a process that took time. He still remembers feeling indifference and bare tolerance the first time he and his wife traveled to Paris in the mid-1990s.

"We were sort of like a necessary evil. We weren't the kind of people that they liked to interact with. We were overly familiar perhaps; we didn't do the absolutely required 'bonjour' when you enter a shop and 'merci' and 'au revoir' when you leave," recalled Cohen, 68, a retired university professor who lives in San Diego.

A waiter once shooed him away when he asked for some ice cubes for his drink.

But that attitude changed remarkably when the couple made an effort to improve their French and learn more about the culture.

Cohen now knows, for instance, that at an outdoor Parisian market, you don't just pick up an apple but rather tell the vendor when you plan to eat the fruit so he can pick out the one that will be exactly the correct ripeness for eating at that time.

The Cohens have been to France five times now, and these days, they get a friendly response, Cohen said.

Europe, in turn, seems to have adapted to visitors.

In a cringe-inducing experiment staged by ABC's "What Would You Do?" program not long ago, two actors pretending to be obnoxious American tourists were unleashed on Paris while hidden cameras recorded the reactions they received.

The couple talked in loud voices, made no attempt to speak French and pestered strangers for photos. But even after trying to pressure a couple at a restaurant to give up their table and attempting to sample another diner's meal, the faux U.S. tourists were treated mostly with amused politeness.

In fact, the most outraged reactions came from other Americans who were horrified by the spectacle.

U.S. tourists may be benefiting from the more positive global image of the United States recently.

Ratings of America were once again overwhelmingly favorable in Western Europe in 2010 after dipping in the mid-2000s when opposition to the war in Iraq was at its loudest, according to the Pew Research Center's annual survey of how other nations view the United States.

About 73 percent of the people in France and 65 percent of Britons now have a favorable view of the U.S., compared with 39 percent and 51 percent, respectively, in 2007.

Meanwhile, ratings of America have improved sharply in Russia, China and Japan since 2009.

Traveling through Asia -- their favorite destination -- the McCraighs have never had a negative reaction when they've told people they're American, Natalie McCraigh said.

"Neither my husband or myself are nervous to reveal our American citizenship any longer," she said. "For the most part, the United States is still looked upon favorably as a place where dreams come true."