Mancation II: The wrath of calm 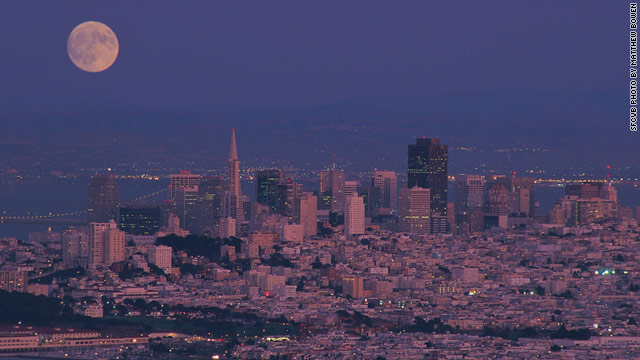 A group of friends can't seem to recapture their youth during a weekend in San Francisco.
STORY HIGHLIGHTS
RELATED TOPICS

San Francisco (CNN) -- Yesterday, I wrote about heading up to the Bay Area for a "mancation" with some old friends. Things on the first evening in town didn't get as crazy and out of control as I hoped (and as a true "mancation" requires), so I awoke the next day determined to get reckless. Unfortunately, we had planned a hike.

An hour into our trek up Mount Tamalpais, everyone was feeling great, sadly. The weather was obscene (70 and sunny in February). From where we stood, we could see clear to the Farallon Islands. When our chitchat turned to mortgages and school systems, I knew that if I didn't do something quick, our mancation was cooked.

Feigning exhaustion (which wasn't super hard because I was exhausted), I suggested we abandon our plan to hike to the top of the mountain and instead hop into our cars and head to Muir Beach for lunch at the Pelican Inn. Mercifully, everyone agreed.

The Pelican Inn is modeled after an old British pub, right down to the beer selection. Poised between Route 1 and the entrance to Muir Beach, it's the ideal place to rest during a hike or abandon a hike altogether. Needless to say, I was hoping to do the latter. In the past, my girlfriend has used a pint at the Pelican as a reward to get me to hike the six-mile loop from Tennessee Valley Beach and back, but this being a mancay, I thought it fitting to go there and end our hike before it really began.

Away we went. The idyllic scenery streamed by. On a sunny day, it's hard to think of a more beautiful place in America that's so close to a city. "Now I know where screen savers come from!" a friend of mine once declared when I took him through this neck of the woods.

I was in high spirits when we arrived at the Pelican, but soon discovered that because of a kitchen renovation, there was no access to the restaurant's signature fried fish and chips and hearty shepherd's pie. Instead, we ate chowder and a ploughman's lunch of cheese, salad, bread and pickled onions. A sensible and fitting follow-up to our vegan doughnut breakfast. It was delicious, but not nearly indulgent enough.

By the time we got the food, we were all flagging from the hike. A woman next to us ordered an Arnold Palmer that looked too good to resist. Within a half-hour, we were placidly enjoying our food amid families spread out on the inn's splendid front lawn. The food and cold tea restored us, as did the fresh sea air and the scent of jasmine. "This won't stand!" I thought. "Surely tonight, we'll redeem ourselves."

I recommended we hit the Mission again. There is no dearth of cool neighborhoods in San Francisco, but I figured the Mission's blend of grit and hip establishments had the most potential for fun and mischief.

It's the home of San Francisco's bohemian crowd and the Mexican community they are slowly displacing. We decided to take the train up to 24th Street and saunter down to 16th, taking in the bars and shops along the way. Valencia and Mission streets are the busiest thoroughfares in the district, and they contain any number of great restaurants, shops and bars.

Things got off to a good start at the Latin American Club, a convivial bar with piñatas hanging from the ceiling and margaritas that will knock the stuffing out of you. The clientele ranges from hipster to young professional. The drinks are cheap and stiff.

With my drink half empty, I started to see the world half full when my companion yanked me from my reverie to go check out Ritual Roasters, one of the pioneers of what has come to be known as third wave coffee -- post-Starbucks schmancy coffee with the full foodhemian artisanal treatment.

From there, we went browsing at Aquarius, one of the most didactic record stores in America. It has everything you've never heard of and a fair amount of the things you have. Reading their verbose and loving reviews of each new release can alternately turn you on to the band of your dreams or make you feel like you're doing math with your eyes crossed.

We passed by 826 Valencia, what David Byrne of the Talking Heads calls one of the top five pirate stores (as in "ahoy, matey") he's ever been to. It also doubles as a writing center for kids. Next to that is Paxton Gate, a remarkable store self-described as "treasures and oddities inspired by the garden and natural sciences." If you need a framed bat or a fossil, this is your place.

We continued past what may be the densest concentration of used bookstores outside a college town and convened in front of Bar Tartine, the companion restaurant to the outrageously good Tartine bakery a few blocks away. This is one of the best places to eat in the city (I once had foie gras agnoletti there that instantly became my death-row meal), but it's expensive and usually packed, as it was the night we stopped by.

The former chef of Bar Tartine opened a restaurant a few blocks over on Mission named Commonwealth. Aside from the burgeoning underground restaurant scene, it's the buzziest food spot in the Mission, which explains why it too was packed. I was delighted. One more strike, and I was going to push for tacos at Taqueria Cancun and drinks at the Uptown, but sadly, that was not to be.

Maverick, a sturdy little restaurant with quality American fare on 17th Street, had tables available. I sullenly made my way through our expertly prepared Southern fried chicken and Brussels sprouts cooked with ham hock. Our conversation drifted from personal finance to work. I tried to guzzle my wine, but my heart wasn't in it. The hour was getting late. I felt myself getting older and more boring, but then, totally unprompted, our waitress asked us where we were going after dinner.

Before I could answer "a retirement home," she suggested we head to The Hideout, a new "secret" bar parked in the back of Dalva, a crowded, above-average everyman's bar in the heart of the Mission. (You read right, The Hideout is a bar within a bar -- a Russian babuskha doll bar, if you will.)

Now we were on to something! We made our way to Dalva, snaked through the throbbing mass of people cackling in the blue light of the front bar and finally found The Hideout, a little red oasis unsullied by the beer-and-shots scene up front.

My friends parked at a booth while I went to the bar and surveyed the long menu of bourbons. As I cased their cocktails, I peppered the bartender with questions. I couldn't make up my mind what to drink. When I finally decided to pull the trigger, I had to wait my turn. While waiting, I looked back at my friends. One was nodding off, and the other was staring at his phone.

I put my wallet back in my jeans and walked over to the table.

"OK," I said, " We can call it a night, but I have to write about this weekend, so we have to make up some jealousy-inducing stories about how it spun out of control."

"Or we could just tell everyone that our mancation was a failure ... which, of course, would be the perfect cover if it was really a success."

"The State I'm In" is a biweekly travel column. Check back on March 2 for the next installment. Read more about the author.