A mancation failure in San Francisco 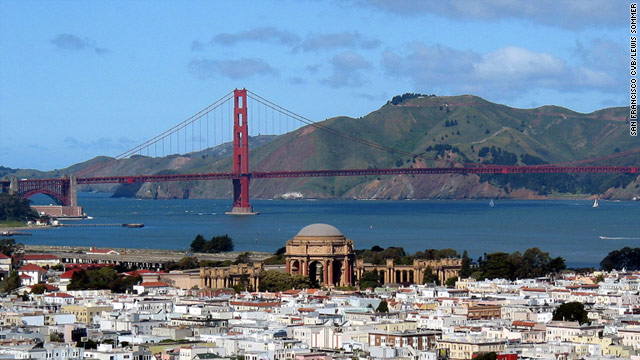 Despite San Francisco's many riches, one group of guys failed to get raucous on their mancation.
STORY HIGHLIGHTS
RELATED TOPICS

San Francisco, California (CNN) -- A few weeks back I went on a mancation to San Francisco. For the uninitiated, a "mancation" is a trip taken by a bunch of guy friends to blow off steam and remember why they are better off home with their families.

It usually involves drinking, general irresponsibility and one or two events that can later be distorted to make guy friends who didn't go on the trip jealous.

Well, I'm sorry to report that my recent mancation was a failure.

It had promise. I was meeting up with some old friends from high school. We've had our share of adventures over the years including one (outstandingly crazy) spooky night on the Danube in Budapest that involved a rave, a mild concussion and butchered chicken.

That history, combined with the fact that two thirds of our group had months-old babies at home, seemed the perfect kindling for a spark of adventure to take light in. But, from the moment I checked in to the affordable, practical Hotel Union Square, I knew something was amiss.

Normally, when it comes to accommodations, we fly by the seat of our pants. This imbues our outings with a sense of mystery: Are we going to sleep in the car? Are we going to splurge for swank digs? Are we going to go to jail? But, no, this time we booked in advance via the online clearinghouse Hotwire.

How it works is they give you cheap rates on rooms, but they veil the names of the hotels until you book. (Thought: Why hasn't anyone tried this for dating sites? Second thought: Don't answer that. ) The Hotel Union Square is what I call an H&M hotel -- after the fast fashion clothing chain that's made America look sharp on the cheap.

It's stylish, modern and young, but it feels slapdash and is missing the touchstones of true luxury. In fact, it feels kind of like you're staying in an iPod with exposed brick. There are nice amenities like a flat screen tv, decent beds, and free wireless, and odd amenities like a shower without temperature controls. Fortunately for me it was the right temperature, which meant I was clean, but every time I bathed I got thrown into an existential crisis about how I was perfectly average.

These practical accommodations aside, all the fixings were there for a debauched Friday night. But what did we do? We had a tasty, reasonably priced meal at Flour and Water in San Francisco's hip Mission District. We didn't even blow money on a cab. Instead we took the practical, easily navigable subway known as BART and then walked the last part by foot.

Flour and Water is a hot ticket. They keep half of their seats open for walk-ins, but even so there is often an hour wait -- just the right amount of time to have a few apertifs and spark mischief. But no such luck. We were seated in a perfectly reasonable thirty minutes. I hadn't even finished my first glass of wine when we were served our seared sardine with parsley root puree and our pizza with balsamic braised radicchio, taleggio and speck.

When the waitress brought out the wrong pasta (we ordered the rabbit and prosciutto tortelloni, but she brought out the rosemary maltagliati with juniper lamb sausage instead) I got a glimmer of hope that this could be the beginning of the fiasco, but instead she told us to keep it if we liked it...and the dish turned out to be the best thing we ate all night.

Despite getting a good night's rest, I had high hopes for Saturday. Yes we planned to hike Mt. Tamalpais in Marin County -- just on the other side of the Golden Gate Bridge -- a seemingly adult way to pass the time. But I happened to know of a few watering holes sprinkled around that beautiful landscape that would be the perfect places to set our weekend crooked.

First, we stopped at the Ferry Building Marketplace for breakfast, inch for inch, the greatest food hall in America. When I saw a basket of glistening donuts at the Pepples donut stall, I immediately ordered two, thinking it would set the tone for an unhealthy day of indulgence.

But no sooner had I stuffed one in my mouth that I saw that they were vegan. A vegan. Blueberry. Donut.

That kind of sums up the Bay Area and my weekend: Seductive and rich done as healthy and harmless as possible. Things weren't looking good.