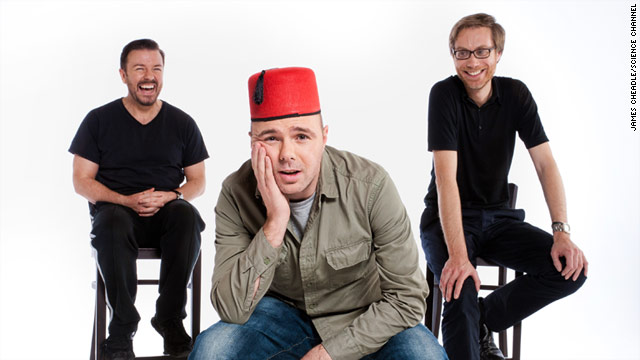 For the Science Channel's new reality series "An Idiot Abroad," the British radio producer (who has acquired an international cult following as funnyman Ricky Gervais' favorite target) embarked on an all-expenses-paid, seven-country, several-month vacation -- and hated every second of it.

"I kept saying, 'I don't want to do this,' but [Gervais] was making me go," Pilkington said. "I don't like it. You can have your money back -- but the cameraman's been paid, the director's been paid. I couldn't get out of it."

The lighthearted travel documentary, originally produced by Gervais and longtime collaborator Steve Merchant for Britain's Sky TV, follows a reluctant Pilkington to the Taj Mahal, the Great Pyramids and every "World Wonder" in between.

In the show's first episode, which debuted in the United States on Saturday, Pilkington surveyed the hazy, mountainous Beijing skyline and frowned. The Great Wall of China stretched into the distance.

Amid a crowd of photo-snapping tourists, Pilkington didn't hide his bemusement at more than 31,000 miles of historical (but recently renovated) stone.

"Am I missing something here?" he said. "So the old stuff's gone on it, really? Then it shouldn't be a Wonder then."

Back in London, Gervais cackled at Pilkington's candid reactions.

"I don't know the politically correct term -- moron. He's a round, empty-headed, chimp-like moron," Gervais remarked during the premiere episode, which attracted a loyal fan base in the UK in September. "And he's a friend."

The show is a "prank turned social experiment," Gervais said in the series preview. He and Merchant plotted region-specific activities (like toad chewing, traffic dancing and fortunetelling) to surprise the self-proclaimed recluse and immerse him, deeply and hilariously, in foreign cultures.

An explosive response on Facebook and Twitter confirmed what Myers expected after the network landed the show for American television in November.

"It's a monster hit," she said. "Karl brings cool, childlike wonder to the places he explores. Viewers can laugh while taking away an important lesson -- he inspires you to travel with your eyes wide open, live the adventure."

Pilkington, who said he'd rather have a quiet weekend by a beach in Spain or Italy, never wanted to live the adventure. When Gervais and Merchant couldn't persuade him to sign on, his girlfriend, Suzanne Whiston, pushed him to step out of his comfort zone.

Much of Pilkington's reluctance stemmed from Gervais' habitual teasing. He knew the comedian, who has been his colleague since Pilkington began working on the "The Ricky Gervais Show" on London radio station Xfm in 2001, had designed every step of the journey for maximum discomfort.

"Ricky's always doing things to annoy me," he said. "That's what keeps him alive, I think. Every day. I'm used to it now."

Of all the places Pilkington visited -- the eight-episode series takes viewers to China, India, Egypt, Jordan, Mexico, Brazil and Peru -- he said Beijing was one of the most bizarre.

"I don't know what the rules are there," he said of popular street food. "I saw a woman eating a scorpion on a stick, and she was normal, wasn't a lunatic. Yet there she was, just eating a scorpion. Of all the creatures on the planet, they're the worst to look at."

Though Pilkington wouldn't recommend such snacks with exoskeletons, he said straying from "touristy things" and interacting with locals were eye-opening experiences.

"You see, they're the same as you, but they do different stuff," he said. "At the time, I wasn't enjoying that. But now that I'm back, I think that's what that is about -- realizing we're not all so different."

Follow Pilkington on his journey Saturdays at 10 p.m. on the Science Channel.