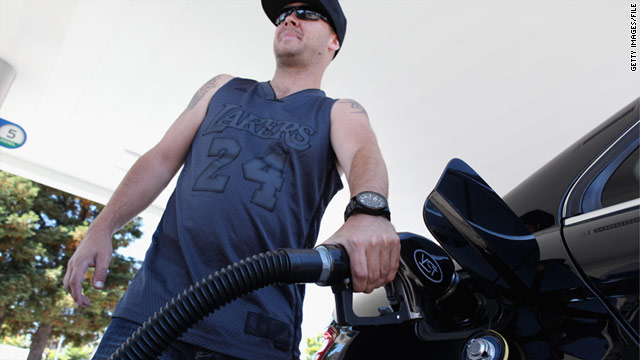 The average U.S. price for a gallon of gasoline is at the highest level since the financial meltdown of October 2008.
STORY HIGHLIGHTS

(CNN) -- U.S. gasoline prices rose slightly in the past two weeks as a glut of gasoline offset a small increase in crude oil prices, according to a national survey out Sunday.

Self-serve regular went up just under 3 cents a gallon, to a national average of $3.11, according to the latest Lundberg Survey of U.S. filling stations. That's the highest price since the financial meltdown of October 2008, when demand collapsed, survey publisher Trilby Lundberg told CNN.

The latest Lundberg Survey, conducted Friday, canvassed about 2,500 gas stations in the continental United States. Since the previous survey, the price of crude oil was up $1.08 a barrel, which accounted for most of the price increase, Lundberg said.

With plenty of refined fuel on hand, "gasoline won't be jumping up further on its own," she said.

"It cannot be known what crude oil prices will be in the future," she said. "Right now, it seems reasonable to expect only small changes in crude and gasoline prices."

2010: Why gas is getting more expensive
RELATED TOPICS

The highest average pump price found was in San Francisco, where a gallon of gas cost an average of $3.37 per gallon. The lowest was in Salt Lake City, at $2.74.