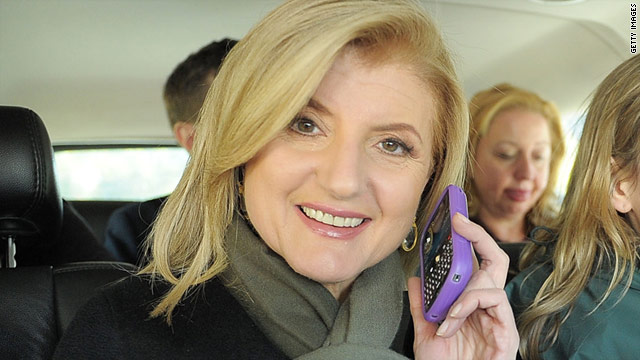 Arianna Huffington chats on her phone as she travels to an event in Washington on October 30, 2010.
STORY HIGHLIGHTS
RELATED TOPICS

(CNN) -- An airline passenger has a beef with liberal commentator Arianna Huffington, but it's her BlackBerry use -- not her politics -- that's apparently ticked him off.

Huffington was on a United Express flight operated by Atlantic Southeast Airlines from Washington to New York on Saturday night when a fellow traveler became upset when she allegedly continued to use her smartphone after the pilot asked passengers to turn off electronic devices before takeoff.

The New York Post identified the man as Ellis Belodoff, 53, of Plainview, Long Island. On Wednesday, he did not return a message left at the business he owns. But he told the newspaper that he became increasingly concerned.

"She was putting the use of her BlackBerry ahead of the safety of the entire plane. It was purely her own self-interest she was concerned with," Belodoff said, according to the New York Post.

Belodoff told the newspaper that a flight attendant finally asked Huffington to turn off her BlackBerry after he repeatedly tried to get the crew member's attention.

Huffington spokesman Mario Ruiz confirmed the "where and when" aspects of the article, but he called it "a nonstory."

"Apparently, the passenger was quite agitated. Arianna thought he didn't like his snacks," Ruiz told CNN.com. "Perhaps he was an iPhone fan."

The airline characterized the incident as "a disagreement between two passengers."

Huffington and the other passenger were reportedly given a "talking-to," but that's where the incident ended.

Huffington, the founder of the Huffington Post website, is the latest air traveler to face the ire of another passenger upset by pre-takeoff phone use.

Last month, a 68-year-old Idaho man was charged with misdemeanor battery after police say he struck a teen who would not turn off his iPhone while the plane they were in was taxiing for takeoff.