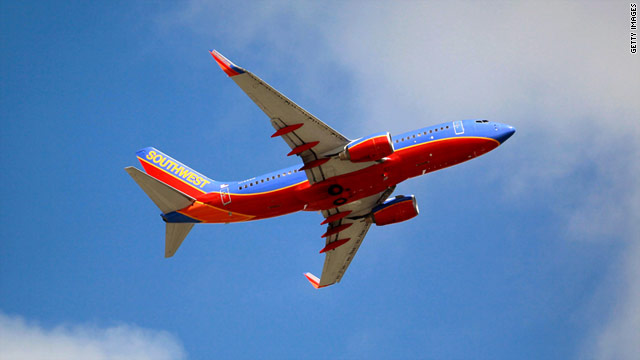 Rapid Rewards members will now earn points based on the price of the flight and the type of fare purchased.
STORY HIGHLIGHTS
RELATED TOPICS

(CNN) -- Southwest Airlines is taking its rewards program from what one industry expert calls "anemic" to competitive with the unveiling of an improved Rapid Rewards program.

"This is very big," Tim Winship, editor-at-large for SmarterTravel.com said of the changes, which are aimed at making it easier for members to earn and redeem points.

"This move by Southwest is going to prompt a lot of internal discussion at the major airlines about what it means to them, what their competitive response should be and then so on," Winship said.

One of the key changes in Rapid Rewards is that members can now redeem points on every seat, every day and on every flight with no blackout dates or seat restrictions. As long as members fly or use a partner once every two years, their points will never expire.

"We took our award-winning program and made it even better by giving our members more flexibility and control over how and when they earn and redeem their points," Gary Kelly, Southwest's chairman, president and CEO, said in the press release. "We know our Customers are going to appreciate the fact that their points don't expire and every seat on every flight is a reward seat."

Work began on improving Southwest's frequent-flier program several years ago, and Ryan Green, senior director of customer loyalty and partnerships for Southwest, called it the "single biggest new product launch in our company's history," in a blog post he wrote on the airline's website.

"We conducted months of customer surveys, focus groups, and research to find out what travelers like about our current program, what they don't like, and what they'd like to see changed," Green wrote.

Rapid Rewards members earn points based on the price of the flight and the type of fare purchased. For example, a one-way Anytime flight from San Francisco, California, to Denver, Colorado, would cost $257 and leave the passenger with 2,570 points, according to the point simulator on Southwest's website.

Flying Business Select on that same flight would give the member 3,324 points and flying Wanna Get Away would garner 948 points. Buying a roundtrip ticket doubles those points.

To figure out when you'll be able to redeem a free flight, take your total amount of points and divide by 120, 100 or 60, depending on which fare type you plan to purchase.

Earn or use points at least once every 24 months, and you'll keep your points forever; a perk that Winship said is a huge improvement from Southwest's current system, which erases any points not used within two years.

"You had to earn 16 credits in 24 months, or else there was really no point of participating in the program at all," he said. "The credits would be falling off the back end as you're earning them on the front end."

By changing the way rewards are calculated -- by revenue rather than miles -- Southwest is going in a direction that other airlines will be hard-pressed to follow.

Airlines' frequent-flier programs are enormous, and tie in with other processes and services that the airlines offer, Winship said. They'd have to redo reservations software and websites and retrain employees to go to a different system.

"It's an enormous top-to-bottom undertaking," Winship said. "I just don't think that's in the cards for other airlines right now."